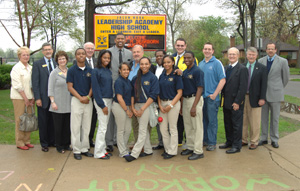 Jalen Rose (back row, fifth from left) and John Junge (sixth from left) stood outside the Jalen Rose Leadership Academy with University of Michigan-Dearborn and academy administrators and students before announcing the Junge Family Endowed Engineering Scholarship, which will cover the costs for two JRLA students to study engineering at the university.

Vacant lots transformed into softball fields on afternoons around 3:30 p.m. in Dearborn.

University of Michigan-Dearborn students would swap their textbooks and notepads for mitts and bats. A healthy dose of competition offered students a necessary break from lectures and exams.

John Junge (’64 B.S.E.) was no stranger to the makeshift softball fields.

“We formed a softball team and we took on all challengers,” said Junge, retired owner of Champions of the West, a private holding company for All Star Inc., which provides operating support, maintenance and minor construction services to military personnel and their families on bases throughout the nation

The bond Junge created with his UM-Dearborn friends, who all transferred from other colleges, inspired him to give back to his alma mater.

In 2008, he established the Junge Family Endowed Scholarship, which offers financial assistance to students who transfer to UM-Dearborn from Calvin College, Henry Ford Community College, Hope College or Jackson Community College. The institutions chosen for the scholarship reflect the four colleges where his friends began their academic journey.

“Those were my buddies and I wanted to honor them,” he said.

A few years after Junge established the transfer scholarship at UM-Dearborn, his son sent him a story from The Wall Street Journal about the Jalen Rose Leadership Academy (JRLA). The story focused on how the former U-M basketball star helped launch an open-enrollment, public charter high school on the northwest side of Detroit.

“I had never met Jalen before, but was very inspired by his great undertaking,” Junge said.

Junge also had an opportunity to meet with JRLA students. The students left such an impression on Junge that he established a new endowed scholarship, which that will cover full tuition for two JRLA students who plan to study engineering at UM-Dearborn.

“Mr. Junge’s endowment will leave a legacy at JRLA and provide an opportunity for some of our students to not only study engineering at UM-Dearborn, but to allow them to do so without having to worry about how they are going to pay for their secondary education,” Rose said.

The scholarships also will help southeast Michigan retain some of its brightest young engineers.

“Alumni like John Junge make it possible for young people, specifically engineers, to pursue their hopes and dreams,” said Tony England, dean of UM-Dearborn’s College of Engineering and Computer Science.

This article first appeared in the Spring 2014 issue of Legacy.

They were recognized at a Ford World Headquarters event.

A longtime favorite of students in the electrical and computer engineering department, Professor Emeritus Malayappan Shridhar is now sponsoring one of the ELB’s new student spaces.

Ulbrich, who started May 15, brings nearly 20 years of higher education development experience to the role.