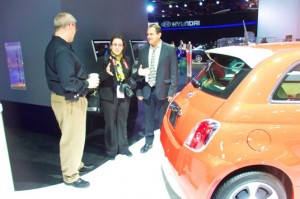 The North American International Auto Show (NAIAS) celebrated 25 years and continued its tour with its annual two-week run in Detroit. About 800,000 people attended the traveling show, which highlights the future of the automotive industry.

Among the 800,000 attendees were UM-Dearborn students Tina Nelson, Liz Walker and Andrew Mitter. Here’s their account from the popular event:

A total of 59 new cars were introduced – 50 worldwide and nine in North America alone.  Among them were new showings from all the major brands, including Nissan, Ford, Jeep, Infiniti and BMW.

“You walk on to the show floor and immediately sense a renewed feeling of confidence in the automotive industry,” said Jim Seavitt, NAIAS chairman. “It’s clear that the industry is back and the global manufacturers have saved their best for Detroit.”

Well-dressed company representatives and stylish models were on hand to help showcase everything new in the automotive industry. Many new cars had exciting features that appealed to the public eye.

More than a few electric vehicles were on display, including the new Fiat 500e that could last up to 120 miles on a single charge. Cadillac ELR also made its debut with a range-extending gas powered generator.

Positioned in the center of the Jeep display was the 10th anniversary Jeep Rubicon. This masterpiece Wrangler featured 17-inch tires and a red leather interior.

What attracted many people to the Auto Show were the famous concept cars. This year was no exception. When it comes to the Ford concept fire truck, anyone would be lucky to have it come to his or her rescue.

The Toyota Fun VII concept car featured an unheard of idea. A camera can take a snapshot of anything the driver wants and can instantly upload the shot to the car like a desktop background on a computer. This makes it so your car can have a stylish new design of your choice.

Nelson, Walker and Mitter also created a video from their experience at the Auto Show, which you can watch by clicking here.

Fall 2019 programming at the Mardigian Library

Your preview of the library's marquee October and November events.

A collaboration between UM-Dearborn and U-M Information and Technology Services departments is bringing a Tech Shop to campus this fall.
Subscribe to the Reporter
Back to top of page