Band, take the field: CECS student graduates with double degree—and a lifetime of memories with the Michigan Marching Band 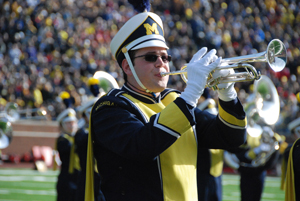 Kyle Milliman graduated from University of Michigan-Dearborn Saturday with a dual degree in engineering mathematics and mechanical engineering—and a lifetime of memories from his time with the Michigan Marching Band.

For University of Michigan football fans, those four words signify the start of the Michigan Marching Band’s pregame performance. For Kyle Milliman, the phrase signified a chance to be part of something meaningful.

“There was one thing that kept me coming back to the games growing up. While the football team was great, the band was the real show,” he said. “Seeing it as a kid made me want to be on the field.”

Milliman had that opportunity as he spent four years as part of the Michigan Marching Band during his time at University of Michigan-Dearborn. Of course, balancing the demands of a full-time course load in Dearborn with a Big Ten marching band experience in Ann Arbor wasn’t easy. Every morning in the fall, Milliman drove from his home in Farmington Hills to campus for classes. By 2:30 he was on the road again to Ann Arbor for an evening of band rehearsal.

“There were moments when I thought, ‘What am I doing?’ It was tough,” he said. “But the adrenaline rush that comes with the experience, the camaraderie with the rest of the band—I wouldn’t trade it for the world.”

Perseverance and a strong work ethic paid off. Milliman graduated Saturday with a dual degree in engineering mathematics and mechanical engineering—and a lifetime of memories from his time with the band.

“I had the best of both worlds and I found my niche here on campus,” he said.

On campus, he served as president of Pi Tau Sigma mechanical engineering honors society and was a member of Tau Beta Pi engineering honor society. He participated in research projects with assistant professor Nilay Chakraborty and completed four coop semesters with McLaren Performance Technologies, where he had exposure to multiple teams including one that recently finished the rear-wheel drive for the C7 Corvette.

“The people are awesome,” he said. “And it’s an opportunity I wouldn’t have had without the coop program here at UM-Dearborn.”

That opportunity led to Milliman being named the first College of Engineering and Computer Science Coop Student of the Year earlier this summer. And it also landed him a job following commencement.

Milliman accepted a full-time position with McLaren that begins next month and he plans to return to UM-Dearborn next fall to begin a master’s program in mechanical engineering or business administration.

As for the band, Milliman still gets to see them in action as a football season ticket holder.

“When I see the band come on the field, I really wish I was down there,” he said. “It’s just a massive thing to be a part of and experience.”