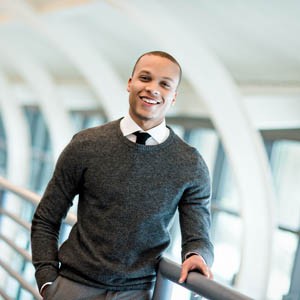 When he was a teenager, Ray Lynem's nephew Jaden was born. From that moment, Lynem knew he wanted to work in the health field.

“My family and I were at the hospital all night while my sister was in labor. During the hours of patiently waiting and hoping for a successful delivery, I witnessed real health care in action,” said Lynem, a UM-Dearborn Difference Maker who is graduating April 26. “It was an eye-opening experience for me to see the work providers do and the positive impact they can have on our lives when we are in such a vulnerable position.”

But he wasn't sure what role in the field was right for him until he spoke with Lawrence Radine, then associate professor of sociology and Director of the health policy studies program. Radine retired after the Fall 2014 semester.

Prior to his conversation with Radine, Lynem attended other universities and worked in different areas within healthcare, but couldn't find the right fit or major.

After some reflection and taking a semester off of school, Lynem decided he still wanted to do something in the health field where he could work with people who needed assistance—but without direct involvement in the clinical aspect of things.

“It was important to me to make a difference. I saw UM-Dearborn had a health policy studies program. It’s something that other local universities don’t have for undergraduates,” he said. “I thought, 'This is it.'”

“He set up a time with me to talk on the phone. How impressive is that?” Lynem said. “We spoke for a long time about my experiences and goals. He said, 'It sounds like this is a good direction for you.'”

Lynem said once he got to campus he found his educational home. He consistently made the Dean's List and he won leadership roles in student organizations.

“I've had so many experiences here from planning the Healthcare Expo with the Public Health Student Society, which had more than 900 people attend, to being connected with internships,” he said. “Through it all, Dr. Radine was instrumental in guiding me. He was there at the very beginning and never stopped introducing me to opportunities and showing me career paths.”

Lynem will attend U-M Ann Arbor in the fall to earn a Master of Health Services Administration degree.

And after that? Well, Lynem does have an ultimate goal.

“My end goal is to become the CEO of a hospital, while also creating partnerships in the community to promote health on a grassroots level,” he said. “The ability to have such a profound impact on the health of others would be an incredible experience and responsibility. My most important mission is to promote justice and equality within the healthcare system by increasing access to care for all people.”

And, because of the opportunities he's had and mentors along the way, Lynem says he'll keep working toward his goals until they are accomplished.

“Growing up in Detroit, I was unaware of the many possibilities out there for me and I wasn't used to thinking that I could be anything that I wanted to be,” he said. “Dr. Radine changed that. He told me if I worked hard, anything was possible. And I believe he's right.”