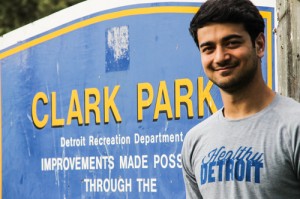 Hayatt Ali stand in front of Clark Park on Detroit's southwest side, where the state's first health park will launch later this month.

Hayatt Ali looks out across a city park and sees more than ball fields and tennis courts. He sees a mechanism for a city’s continued revival.

The University of Michigan-Dearborn senior is an intern with Healthy Detroit this summer and will help launch the state’s first health park. The park will serve as a hub for preventative health activities—including yoga, workout machines, a farmer’s market, free meals for kids, screenings and immunizations, and health classes—and will begin operating later this month at Clark Park on the city’s southwest side.

“We know the best way to treat sickness and disease is through preventative measures, and that’s what Healthy Detroit advocates,” said Ali, who is studying biological science and health policy. “We’re excited to be part of Detroit’s revitalization and to be able to do so through healthy means.”

As the nonprofit’s health park coordinator, Ali works with organizations interested in offering services at the park and with volunteers ready to participate in the work.

He was on hand last month when Healthy Detroit hosted a community service day at Clark Park. The event brought together volunteers from Clark Park Coalition, Detroit Recreation Department, ACCESS and AmeriCorps Urban Safety Project. On the agenda that day? Clean up the park and begin working on the outdoor fitness center and volleyball court.

“The energy is great. The community has been really supportive, and we have tons of partners who want to be a part of what we’re doing,” he said.

Ali sees the work he’s doing this summer as a stepping stone toward a career in public health. He plans to enroll in a master’s degree program following commencement next year before looking for a full-time position.

“When Hayatt approached me about securing an internship, I knew that Healthy Detroit and the Clark Park effort would be perfect for him.  I had just seen Healthy Detroit’s CEO Nicholas Mukhtar speak at a Detroit Wayne County Health Authority event.  Hayatt’s talent, focus and energy are similar to Nick’s,” said Roddy.

Roddy encourages other students who want to make an impact on the health of the region to contact her within the College of Education Health and Human Services.

“We have exciting new Public Health and Community Health Education degrees and can connect students with internship opportunities that allow them to contribute and participate in real change,” Roddy said.