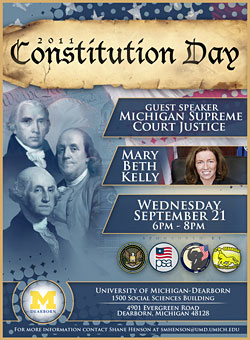 In 2002, the Michigan Supreme Court appointed her the chief judge of the Wayne Circuit Court, making her the first woman to lead that bench. She served as chief judge through 2007, focusing on budget deficit reduction, timely dockets, jail overcrowding and the court’s Family Division. Under her leadership, the Family Division doubled in size to devote more judicial resources to cases concerning children and families. She also led efforts to improve the racial diversity of the Wayne County jury system, working with the National Center for State Courts to gather data and recommend countywide solutions.

Before becoming a judge, Kelly was a commercial litigation partner with the law firm Dickinson Wright, which she joined in 1987. She earned her bachelor’s degree at UM-Dearborn and her law degree from the University of Notre Dame Law School.

Kelly has received numerous honors for her judicial leadership, including the Arab American Anti-Discrimination Council’s Distinguished Leadership Award. For her work on children’s issues, she was named Vista Maria’s Child Advocate of the Year and also was recognized by the Ennis Center for Children as Advocate of the Year. Kelly serves as an advisor to Vista Maria and to U-M’s Detroit Center for Family Advocacy. She is an adjunct law professor at the University of Detroit-Mercy Law School.