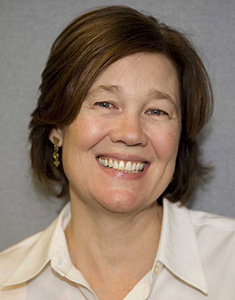 Cecile Aitchison, assistant vice chancellor for the office of institutional advancement, has been chosen to receive the 33rd annual Susan B. Anthony Award from the University of Michigan-Dearborn.

Presented by the campus's Commission for Women, the award recognizes a member of the UM-Dearborn community who has made significant contributions to gender equality.

Aitchison will receive the award during a dinner ceremony on Wednesday, April 6 at Fairlane Center South. The event begins at 5 p.m. with a silent auction and reception, followed by dinner and an awards program.

In her role at UM-Dearborn, Aitchison provides leadership for the development and alumni engagement efforts. She is credited with managing the successful Capital Campaign that ended in December 2008 and raised $46 million for scholarships, operating and faculty research. She is a member of the MLK Day of Service Committee and served a four-year term on the Staff Senate, co-leading the charge for staff and faculty dependent tuition benefits. She has served as a volunteer for various community-based organizations in Detroit.

Prior to her current position, Aitchison served various community-based organizations in Detroit, including Alternatives for Girls--which serves homeless young women-where she played a key role in helping the organization grow and become financially stable during its early years. During her time there, she often found herself mentoring younger staff as well as the organizations residents.

Aitchison also worked at WARM Training--a non-profit organization in Detroit that promotes the development of resource efficient, affordable, healthy homes and communities through education, training and technical assistance-where she was a resource for community development groups, many of which served single mothers.

In addition, Aitchison organized female health care workers in Michigan and East Texas for the Service Employees International Union; wrote for Teamster Voice, the national newspaper of Teamsters for a Democratic Union; and served as the vice president for external relations at Big Brothers/Big Sisters of Metropolitan Detroit.

College of Business has top programs in the state, nation

U.S. News & World Report, Poets&Quants and The Princeton Review have all recognized COB in their lists and rankings.

Environmental students awarded scholarships by the Garden Club of Dearborn