More than 100 guests attended the College of Engineering and Computer Science’s Donor/Scholar Recognition Dinner on Oct. 14 at the Henry Ford Estate. 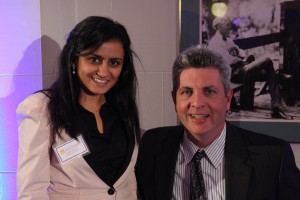 Dalia Kozman, an electrical engineering major who transferred to UM-Dearborn in Fall 2009, is a recipient of the Henry W. Patton Scholarship. She graduated from Al Qalb El Mukads Language School for Girls in Cairo and then attended Cairo University, studying electrical engineering. She is pictured with David Wolfe, CEO of Acromag. 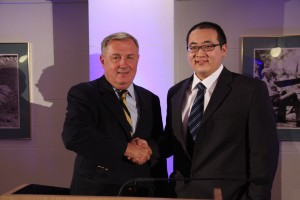 Nigel Wu, a manufacturing engineering major experiencing his first semester on campus, is a recipient of a Junge Family Endowed Scholarship. He graduated from Pioneer High School in Ann Arbor and attended the U-M and Washtenaw Community College before transferring to UM-Dearborn. Wu is pictured with John Junge, president and CEO of All Star Inc.

For 24 hours, the entire university will come together and support the causes that make us the leaders and best. One of campus’ Wolverines — who’s worked for NBC, Dreamworks and Illumination Entertainment — shares why he gives.

The COB Internship and Career Management Center and the mentors met within it have a lasting legacy.