Due to the COVID-19 pandemic, UM-Dearborn classes are being held remotely through the end of the semester, Summer I and Summer II. Most campus operations are being conducted remotely and buildings are closed. Before coming to campus please call ahead to determine how services are being delivered. Events have been postponed or canceled, including Spring 2020 Commencement. Pass/fail decision date extended to May 5. For more updates please visit the Coronavirus information page.

The four-time collegiate national champion talks about her complicated rise to the top of her sport — and why sports aren’t everything.

The first time I meet Marina Goocher, I’m completely unaware that she’s a wrestler — let alone an elite one. We’ve actually been connected to talk about her role in a new honors program for her college, which emphasizes student research and internships. We cover the basics: How she’s faring balancing a full-time co-op with Ford Motor Company with her academic work; and how she’s getting way more geeked about vehicle seat foam than she ever thought possible. It’s only after the interview, when I ask her casually if she has anything fun planned for the weekend, that I slowly realize who I’m talking to.

“I’m headed to Texas for a wrestling meet. It’s actually nationals,” she tells me. Still oblivious, but curious, I ask her a couple questions about it, including how she’s feeling about “her chances.” She politely, and without sarcasm, explains that since she’s won the last three collegiate national titles, she feels pretty good about them and she’d really like to go out a four-time champ.

It jogs my memory of the few pieces of Goocher’s story I now realize I’m vaguely familiar with. Back in 2017, Goocher challenged a declaration by the governing body of her sport that barred her from wrestling male athletes. It was a somewhat high-profile case for a time, drawing interest from the ACLU and garnering a fair amount of media attention. To Goocher, the National Collegiate Wrestling Association’s opinion seemed to clearly conflict with the “equal opportunity” standards in the Title IX statutes governing collegiate athletics. Specifically, because there were no other female athletes to wrestle within her team’s league (or even within a reasonable driving distance), the ruling, in effect, denied her from the regular season competition that was available to her male teammates. Importantly, however, she could still wrestle at exhibitions and at the national meet, as long as she only wrestled female athletes.

The opinion of the NCWA was actually something Goocher and her coach solicited themselves. UM-Dearborn simply hadn’t had a female wrestler before, so when Goocher joined the team, the coach thought it might be worth checking into possible roadblocks. But a ruling that barred her from wrestling male athletes, not just at competition but also at team practices, came as a shock. Since age 5, when she first discovered her love of the sport, she’d always wrestled boys. And all through middle and high school, there were a handful of times she can remember someone even making a big deal out of it. Twice it came from male competitors who refused to wrestle her. Another time, it was a set of parents, who demanded she withdraw from the meet rather than wrestle their son. In response, Goocher’s dad suggested maybe their kid should be the one to withdraw since they seemed to have the problem with it. 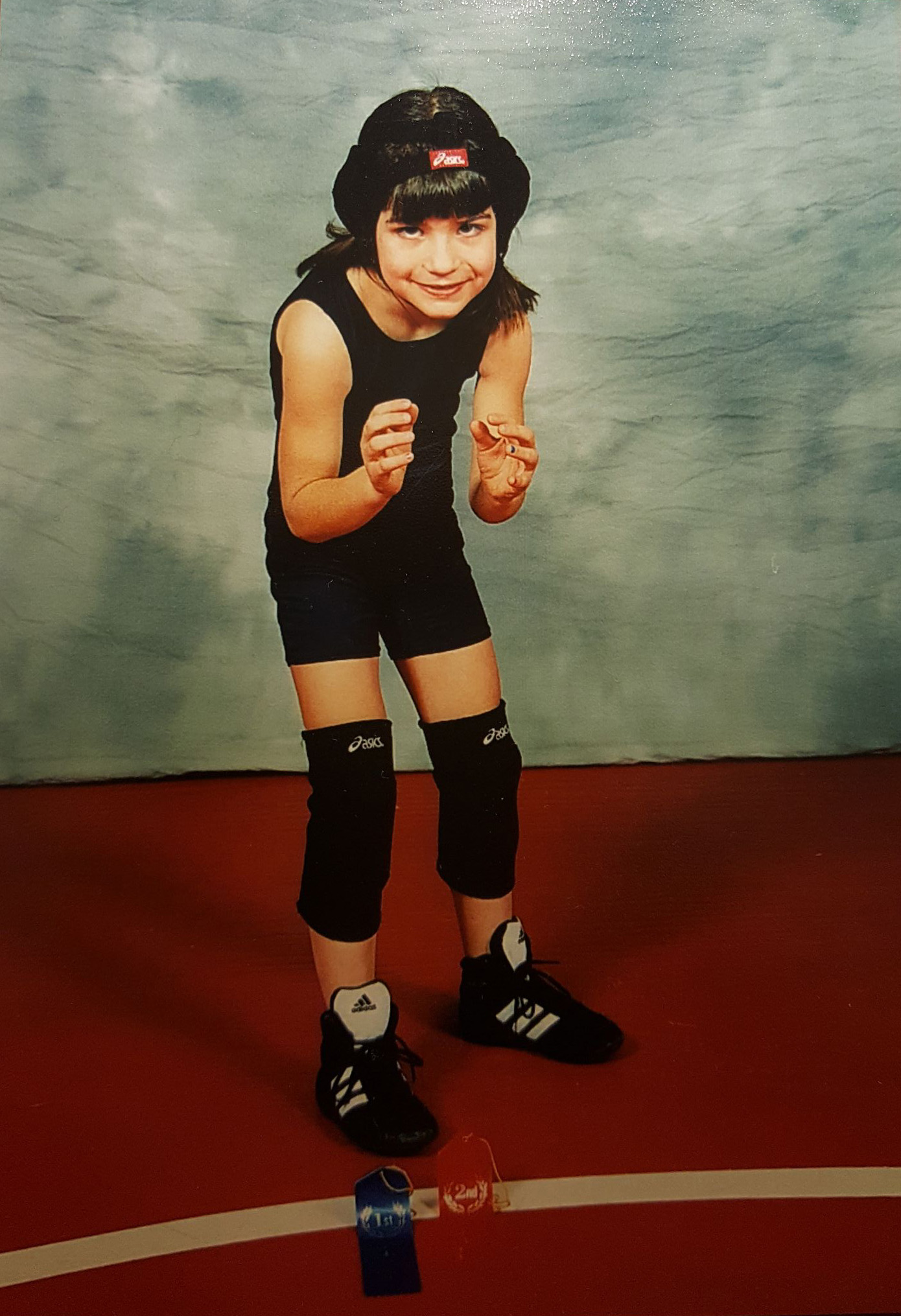 Notably, Goocher says her teammates, coaches and even coaches of other teams were overwhelming supportive. She tells me a story about a time when the coach at a neighboring school intervened with boys on the team who were teasing their teammate for “losing to a girl.” “The coach lined all the kids up on a wall and said, ‘Hey you’re giving your teammate a hard time for losing to Marina? That’s not how you should treat your teammates. You support them, you don’t put them down. And, by the way, if any of you guys think you can beat Marina, I’ll set up a match right now.’ I thought it was so cool. He wasn’t standing up for me. He was standing up for respect.”

Marina got respect because she was a supportive teammate, a great sport, and most importantly, because she was a stellar wrestler. As she got older and the boys got stronger, she proved just how tough she could be to beat. She adjusted her previously offense-based strategy to a defensive one that relied on leverage, technique and superior conditioning. Her matches were typically low-scoring and often went into overtime. The approach was deliberate: The longer the match went, she says, the more she could use her endurance to outlast an opponent.

Sometimes she even exploited people’s stereotypes to psych out competitors.

“Girls aren’t supposed to be tough, right? So in high school, I started wearing pink socks, pink headgear, pink nail polish, and I’d walk on the mat like I wasn’t taking it seriously,” she says. “For the people who didn’t know me, they’d just look at me thinking this was going to be an easy match. A few minutes later, they were walking off like ‘what just happened?’” Later, when one of her teammates asked her to share the secret to her winning streak, she told him jokingly that it was the “power of the pink.” Her teammate subsequently painted his thumbnails and pulled out some wins of his own.

Being an equal part of a team was an experience that came to an abrupt end once she got to college. After the NCWA issued its “boys wrestle boys, girls wrestle girls” opinion, she could still attend practice, but practice now largely became training by herself or working individually with her coach. During her first and second years at UM-Dearborn, the fact that she had no female competitors meant that nationals was both her first and last meet of the season. It was essentially like trying to win the Super Bowl without ever playing a regular season game, let alone being tested in the playoffs.

Even so, her first year, as a complete unknown with a record of 0-0, she took the title. The following year, now the No. 1 seed in her weight class, she beat everyone again. Her third year, she took advantage of a clarification in the NCWA’s ruling and wrestled in two non-league open tournaments prior to winning nationals again. In 2019, she put the proper exclamation point on her athletic career as a four-time collegiate national champion.

Despite the challenges of trying to train and stay sharp without the benefit of regular competition and the psychological burdens that came with fighting the NCWA, the low-key Goocher seems to have taken the four-year saga mostly in stride. To be clear, she thinks the policy, which still hasn't changed, is unfair. But she looks back on her years as a collegiate wrestler as a period of accomplishment more than conflict. Part of that seems to come from the fact that wrestling, despite the elite level she reached, was never her top priority in college. When picking a school, the final choice was between UM-Dearborn and Michigan Tech — and both made the cut because of their strong engineering programs. The fact that UM-Dearborn had a wrestling team was merely a perk, not the decisive factor. If there was one, she says, it was that she’s really not a fan of winter.

“I know some people go to a university for the sport, and I’ll ask them what they’re going into, and they’ll say, ‘I don’t know, I’ll choose when I’m there.’ And I just can’t believe that. I can’t imagine choosing a college and planning this whole period of your life when you’re prepping for a career around a sport that’s only going to last you another four years. So as much as I love the sport, I know the end game in college has nothing to do with wrestling. It’s about setting myself up for a career that I love.”

Without question, Goocher has done that. During her time at UM-Dearborn, she completed five semesters of internships — including three with Ford Motor Company. She worked on a senior design team that built adaptive technology for a summer camp serving kids with serious medical conditions. And she’s been a standout member of several student organizations, including the Society of Women Engineers. The only box left to check is choosing among the four job offers now on the table as she heads toward the graduation stage.

She’s leaning toward taking one that keeps her close to home. As she makes a leap that’s going to involve a lot of change, she likes the idea of having the constant of her family. And it would also give her a chance to put more hours into something she’s only had scarce time for over the past few years: Being a volunteer assistant wrestling coach at her high school alma mater.

As in her time there, the team is all boys and one girl, and there is nothing but goodwill for her being there. She’s enjoyed helping a couple kids in particular work on their mental toughness, which was always one of her strengths. One boy, she says, is a really gifted athlete, but at a recent meet, she observed him throwing in the towel when he was way behind in a match. From a mental perspective, she says that’s no man’s land. “Even if you’re not going to win, you can’t ever give up, because it’s not just about competing against someone else, it’s about the competition with yourself. And you can always leave the mat feeling good about what you did if you gave it absolutely everything you had.”

The second is a boy who challenges her to a rematch any day she’s able to come to practice. She loves the tenacity. “It’s like he believes if he keeps trying, he’ll eventually get there,” she says, smiling, adding though that he’s going to have to earn it. Even in retirement, when no one’s keeping score, being undefeated still means something.

A UM-Dearborn student teacher explains why letting go of expectations is what the kids need most right now.

How COVID-19 could affect the U.S. Presidential Election

Political Science Professor Mitchel Sollenberger, who’s a political source for USA Today, C-SPAN, The Hill, Washington Post and others, talks about how the COVID-19 crisis may impact what happens on November 3.

They were recognized at a Ford World Headquarters event.

The stock market may be volatile, but a UM-Dearborn finance expert says don't panic. Here's why.

"Professor Nick Vlisides keeps providing advice to us about how to view the stock market and how to move forward ourselves. When I look back, that’s what I’ll remember,” says Finance major Vivian Dihn.
Subscribe to the Reporter
Back to top of page