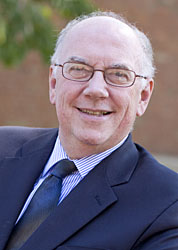 Chancellor Daniel Little was one of three recipients honored with a community service award from the Urban League of Detroit and Southeastern Michigan (ULDSEM) Guild during its 45th annual gala luncheon at the Detroit Marriott Hotel, Renaissance Center on Dec. 4.

Wayne County Probate Judge Freddie G. Burton and the Target Corporation also were honored. In addition, the gala event recognized more than 200 Detroit-area youth for their positive attributes and achievements.

"It is important to consistently recognize youth who demonstrate academic commitment, integrity, and civic responsibility," said N. Charles Anderson, ULDSEM president and CEO, in a press release. "These exceptional youth will receive 'Do the Right Thing' awards designed to celebrate their efforts in setting a positive example for their peers and their contributions to make our community a better place to live."

Little serves on the boards of several civic and professional organizations, including serving as chair of City Year Detroit and is the chair of the Macrohistorical Dynamics network of the Social Science History Association.

Since 1951, the ULDSEM Guild, an interracial organization of concerned women, men and young adults, has worked diligently in support of the Urban League's commitment to equal opportunity for all persons.