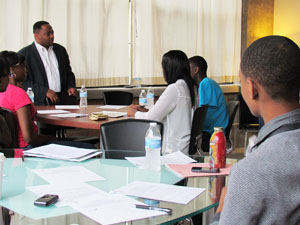 On a muggy August morning, a group gathers in a loft in midtown Detroit, ready to pitch their ideas for upcoming public service announcements.

The voices behind the pitches? They are 15 soon-to-be 10th-grade students from various high schools in Detroit. And they’re spending their summer engaged in community-based learning through the Community Economic Development Club.

Truman Hudson Jr., a Detroit native and student in UM-Dearborn’s Ed.D. program, began the club as a way to teach kids to take a critical look at the world and then practically apply that knowledge.

“I didn’t grow up with the access that my son has. A lot of these students still don’t have that access,” said Hudson, who has run the club this summer out of his consulting firm, DEXDesign Associates. “But they’re here because they want to be here; they want to be involved in the community and to be exposed to different ideas.”

The curriculum stresses cultural relevancy—an idea that benefits both the student and the community. “Don’t just teach y=mx+b,” he said. “Show how y=mx+b. And I know that because of this situation that happened in my community.”

So students work with local non-profit organizations. The PSAs they’re developing are to raise awareness about college accessibility, food justice and LGBT issues in the African American community.

Next, they’ll put together a survey to further research their issues. Bullying is an issue? Kids in urban areas lack access to quality education? Who says? They’ll start the survey on their Facebook pages, asking friends and family to participate.

This fall, the program will move to UM-Dearborn to partner with the GEAR-UP program, providing the students with experiences that reinforce continuing education and a college-going culture. A BMe Leadership Award from the Knight Foundation, Open Society, and Miami Foundation will help provide additional resources as the club grows.

As for this summer’s participants? They’ll stay with the club, becoming student-mentors for the incoming students.

The idea of mentorship is a key component of Hudson’s program and he regularly takes students under his wing.

It’s only fitting, since it was a conversation with one of his mentors that challenged Hudson to being working with youth. “My mentor pointed out that we’ve spent millions investing in the community but haven’t seen a change,” Hudson said. “He said, ‘If you want systemic change, teach the children.’”

For kids with neurodevelopmental disabilities, back-to-school can be a tricky time

A UM-Dearborn lecturer has some practical wisdom for special education families who are navigating a complicated new school year.

Are remote internships worth it? These UM-Dearborn summer interns say ‘yes.’

We get some real talk from four UM-Dearborn students whose summer internships went remote due to the pandemic.