Customized learning: Software engineering student ready for the next era of user experience 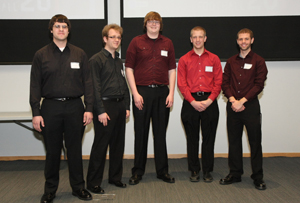 Justin Hawke (second from left) and his senior design teammates won the Computer and Information Sciences Department Senior Design Competition. They created the artificial intelligence for a football game for Marvel Apps.

Justin Hawke spent his college career plugged into the world of video games. He wasn't playing games, though. He was too busy critiquing them and developing his own.

Hawke will graduate from University of Michigan-Dearborn this Sunday with a degree in software engineering, with an emphasis in game design.

“People hear the term game design and kind of turn up their nose, thinking all you can do is make games,” Hawke said. “But the things you’re learning in the process are things you’re going to use anywhere.”

Case in point: Hawke has accepted a full-time position with Delphi. There, he’ll work on dashboard displays for cars, developing the programming for the digitally rendered interfaces.

The location of the speedometer, background colors, digital vs. analog—all will be customizable for drivers in the future.

For Hawke, the idea of customization goes back to game design.

“With games, you’re focused on user experience. A lot of companies are focusing more and more on that all the time,” Hawke said. “In the automotive industry, they’re treating cars like consumer electronics. They want everything to be user-friendly, cool and cutting edge. But it still has to maintain the robustness and reliability of the industry.”

That’s where Hawke’s experience at UM-Dearborn comes into play.

As a student, he completed a co-op with Visteon and led outreach events as a member of the Association for Computing Machinery. He helped develop the artificial intelligence for a football game for Marvel Apps and pitched another game that’s in production now. And he’s working on an underwater robot with members of the Intelligent Systems Club.

“When I started at Visteon, they were surprised by what I already knew,” he said. “There are a lot of things people have to learn on the job that I’ve already been exposed to. My experiences here give me a head start.”

Hawke’s career will take him away from game design for now, but he doesn’t plan to abandon the field. Tinkering with and developing games? That, he says, is what weekends are for.