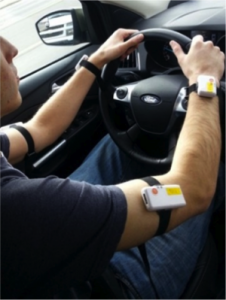 Many car companies say they will release their autonomous, or self-driving, vehicles by 2025.

With autonomous car experiments beginning in the 1920s and promising trials in the 1950s, Computer and Information Science Assistant Professor Omid Dehzangi says he’s excited to see these next-level vehicles on the road. But he knows there is more research to be done.

To get the public ready for this change, he’s focusing on the human side.

Dehzangi, who has been researching wearable technology and its application for years, said when he started teaching on campus last year, he looked at the automotive industry, the direction it was headed and what was still needed.

To do this, he’s been studying—with assistance from University of Michigan-Dearborn students—the biological state of the driver and the impact that has on driving actions.

“Yes, in the near future, your car will do the driving for you. But there will be times that your car will need your help,” he said, noting that these vehicles are technically semi-autonomous. “It will need to pull you back into the driving experience. But how distracted are you in that moment? If your car needs you to, will you be able to make a fairly quick decision?”

With driver distraction as the No. 1 cause of vehicular accidents, Dehzangi is using wearable technology to measure the alertness of the driver. According to a 2014 study from the National Highway Traffic Safety Administration, more than 1,150 people are injured daily in crashes that are reported to involve a distracted driver.

Using FDA-approved noninvasive equipment—such as small, light-weight computer sensors on arm bands, an electroencephalogram (EEG) cap and wireless signals sent to an in-vehicle input system—Dehzangi and his students have collected the volunteer driver information in a database and have correlated the human responses like heart rate, blood pressure, muscle movement, skin responses and other physiological and neurological signals with the information from the vehicle, such as speed, acceleration and steering wheel angle.

The result: When drivers drive in nonpeak traffic periods—when there is less to do and react to—their distraction is higher.

With that scientifically proven, Dehzangi and his team are looking at ways to measure driver distraction in real time to create their autonomous vehicle distraction alert system.

“A real-time measure of distraction will let the smart vehicle know if the driver is distracted or not. If yes, how distracted? The vehicle will then have a suitable measure, maybe a pleasant noise signal, vibration or conversational feedback, to bring the driver back into the driving experience,” he said.

“Dr. Dehzangi is very research oriented and I’m glad to be on his team,” Williams said. “I’m already doing now what I want to do after graduation.”

And Dehzangi is not only proud of his students and the caliber of their work – he’s also pleased with where the research is heading.

“In the vehicle industry, things are changing so fast. In the near future, we need to make these connections on a higher level by having our biological markers communicate with additional smart systems, like the other autonomous vehicles on the road,” he said. “With our research, we’re looking to accomplish that.”

In the renewable energy era, the ‘smart grid’ is going to have to be unbelievably smart

Associate Professor Wencong Su explains why retrofitting the electric grid to accommodate electric vehicles and wind and solar power is such a complex challenge.

Keviyan Richardson says his UM-Dearborn education helps guide him when working in his city. The latest project — called American Riad — may be the biggest community project he's done yet.
Back to top of page