Detroit 1-8-7 episode, with scenes shot on campus, airs this week 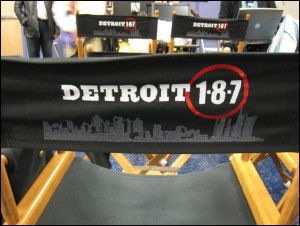 Scenes were shot on campus for an episode of ABC-TV’s police drama, “Detroit 1-8-7,” that airs on Tuesday, Oct. 26 at 10 p.m., on Channel 7 locally.  For those who can’t tune in at that time, the full episode will be available to watch online later that week at http://abc.go.com/shows/detroit-1-8-7.

“Detroit 187” is set in the city (as the name implies) and is currently being filmed in locations across metro Detroit. The production crew took over parts of the UM-Dearborn campus on Saturday, Sept. 11 to film tomorrow’s episode. Multiple scenes were shot in areas around the Chancellor’s Pond.

Students in the College of Arts, Sciences, and Letters’ Department of Language, Culture and Communication were given the unique opportunity to shadow the production throughout the day, interacting with the producers, directors, art directors and crew people that are responsible for the series.

The university was reimbursed for all expenses relating to the production.