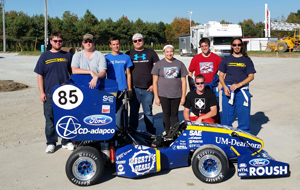 The University of Michigan-Dearborn Formula SAE racing team made a strong showing last month at the annual Toronto Shootout. The team placed fourth out of 17, beating teams from Cornell University and Massachusetts Institute of Technology (MIT), among others. UM-Dearborn driver Trent Brown placed fifth out of 51 drivers.

The Shootout, a yearly racing competition hosted by the University of Toronto Formula SAE team, was comprised of a full day of autocrossing. Formula SAE is a student design competition organized by SAE International in which students design, manufacture and build Formula-style race cars.

Team manager Mary Bellino is the newest member on the team. The sophomore mechanical engineering student said being part of the team has given her great learning experience and practical application in both automotive design and project management.

The team started out the season with goals to improve from the last season. They made physical changes to the car with the addition of wings, which Bellino described as a “big adjustment.”

After the car was built, Bellino and the team spent every weekend in the parking lots on campus, practicing in preparation for upcoming competitions.

“We wanted to do everything to make sure we were perfectly set up for Toronto,” Bellino said.

Moving forward, the team hopes to build off the momentum of the Shootout. They have plans for a complete redesign of the car, including bigger wings, and goals of placing in the top 10 in upcoming competitions.

“Many of the members still have a few years to graduate, and the carryover means we can pick up where we left off,” Bellino said.“This year is going to be a good year for our team.”