Engineering by design: Inside the GAME Lab 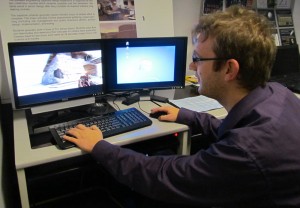 Justin Hawke repeatedly punched down on the keyboard in the Games and Multimedia Environments (GAME) Lab. On screen, he haphazardly chased a soccer player around an empty beach.

“I’m not very good at this,” he said, preferring an Xbox controller to mouse and keyboard controls.

The game he’s demonstrating is Beach Blitz, an idea he pitched to his classmates and designed with them in Game Design 2. Looking back, he sees that he learned more than programming through the whole experience—even if he still doesn’t move expertly through the game.

“Working on this showed me a lot about team dynamics,” said Hawke, a software engineering student with a concentration in game design. “Keeping everyone on task, not making assumptions about people’s abilities; it was a lot more than just having a good idea.”

And that’s exactly the point, according to Bruce Maxim, associate professor of computer and information science.

“Video game development is a good way to introduce students to computer science,” he said. “It’s team oriented with real-time interactions and programming. Most likely, this is what they’ll be doing in the real world.”

It turns out real-word experiences have a lot in common with time-killing mobile apps like Angry Birds or Candy Crush. Designing corporate training programs or vehicle entertainment systems? It all comes down to user experience.

“There is a shortage of software engineers who understand game development and the focus on user experience that goes along with it,” Maxim said. “But we’ve been training students this way for years.”

That kind of training has helped Hawke easily transition from the GAME Lab to his co-op at Visteon. What he sees as he works on the user experience of a vehicle’s LCD screen is similar to situations he’s faced while working on Beach Blitz.

“I didn’t know game design would be applicable in other programming situations, but a lot of what we’re learning is useful everywhere,” he said.

Now Hawke and his senior design team are working on artificial intelligence design for a football game.

As they work in the GAME Lab to make deadlines, one key element is different than projects past.  The lab now is updated with new AlienWare hardware.  The hardware from Dell—with one terabyte hard drive, 17 gigabyte RAM, a better capacity to deal with the heat generated and a stronger power supply—ensures that students’ projects aren’t limited by outdated systems.

For Maxim, it all goes back to user experience.

“We’re to the point where our students are creating multi-player 3D games in six to eight weeks,” Maxim said. “We don’t have to push the system to the limit anymore. Students can create and run any program they can dream up.”

FacebookTwitterLinkedIn
College of Engineering and Computer ScienceComputer and Information Science

A new NSF-funded project from two UM-Dearborn computer scientists is taking aim at an often overlooked challenge in scientific research.

An inclusive European Study Abroad experience at an accessible price

Campus leaders created a whole new study abroad model — and made it open to all undergraduate students in a desirable location at an affordable cost.