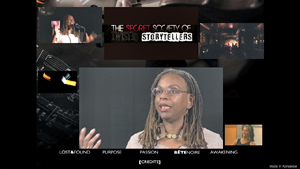 She even shared the stage with the iconic George Clinton and Parliament Funkadelic.

“She has all these different facets in her life, and that’s kind of what an interactive documentary is all about—exploring a subject matter by following different paths,” said Jennifer Proctor, assistant professor of journalism and screen studies (JASS) at University of Michigan-Dearborn.

Last fall, Proctor transitioned JASS 405 from a web design class to a course that focuses on new and emerging media. As part of the redesigned course, students explored the emerging media landscape by creating a nonlinear, interactive documentary.

So when it came time for Proctor to select a subject for the documentary, she looked no further than Shakoor.

Over the course of the semester, UM-Dearborn students sifted through Shakoor’s past performances, recorded her recent concerts and interviewed the Detroit entertainer about her prolific career.

The end result is a one-hour documentary, which students premiered on campus in front of Shakoor and her friends.

“It was so interesting to hear about someone who has been all around the world, and she’s just such an interesting person,” said Kathlyn Mooradian, a senior communications major who interviewed Shakoor. “Learning about her and doing this for her, it was probably the best experience I’ve had in a college class.”

The project symbolizes the JASS mission, which is to provide students with the necessary skills to excel in a number of emerging media outlets.

“Part of what we try to emphasize in JASS is that industries like print journalism, game design and TV production don’t exist as silos anymore,” Proctor said. “In media, you’re always doing a little bit of everything. Even if students want to focus on one particular industry, they can obtain skills in other facets of media production that will make them desirable to employers.”