To the extremes: ISC pushes forward for fastest overall time in competition 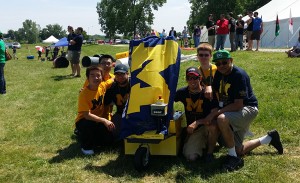 Angelo Bertani had a good feeling as he watched University of Michigan-Dearborn’s robot run the basic course at the 22nd Annual Intelligent Ground Vehicle Competition.

The robot weaved its way around obstacles and curves and successfully completed the course on its second attempt. That’s when the team decided to push the envelope.

“It’s a competition and we wanted to see what we could do,” said Bertani, a member of the university’s Intelligent Systems Robotics Club. “We started trying to go faster and faster. We had never tried to go to these extremes before and we were kind of surprised by how well it was able to perform and handle the faster speeds.”

The risk paid off for the team. After setting the speed record during the preliminary races, their robot finished with the fastest overall time by more than 20 seconds in the Basic Autonav Challenge and became one of only six teams to complete round one of the competition.

The next day, the team finished just two feet short of completing the advanced course. They took second place overall in the Autonomous Navigation Challenge behind Oakland University. The annual competition included 31 collegiate teams from the U.S., India, Japan, Canada, Jordan and Turkey.

Bertani says the results were better than they expected—their original goal was to complete the basic course in a respectable time. He credits the good showing to knowledge gained from previous competitions.

Bertani was joined on the team by Zach DeGeorge, Yanchen Shange, Erik Aitken, Changlin Li and Jason Spurlock. Intelligent Systems Club adviser Nattu Natarajan was impressed with the team’s showing, which earned them $2,000.

“This year was an incredible experience,” said Natarajan, associate professor of electrical and computer engineering. “It was a memorable graduation experience for our graduating members, and our new members learned a lot from the competition and are ready to take the lead for next year’s competition.”

Bertani graduated this spring and says his time working with a team on intelligent ground vehicles prepped him for life after college.

“The experience is invaluable,” he said. “When I go for job interviews I have something to talk about that’s totally out of the box from what other students experience.”

A 53-member team of students, faculty and staff put together a huge energy savings plan that could save the university $200,000 a year.

The stock market may be volatile, but a UM-Dearborn finance expert says don't panic. Here's why.

"Professor Nick Vlisides keeps providing advice to us about how to view the stock market and how to move forward ourselves. When I look back, that’s what I’ll remember,” says Finance major Vivian Dihn.

Students in an education course want you to ditch your bottled water habit.

To be ready when the economy starts to rebound, students should make sure they’re doing the stuff on this list.

Get a specialized education in a short amount of time

The College of Arts, Sciences, & Letters introduces five new certificate programs for the fall that focus on food, language, media production and more.

A UM-Dearborn professor and historian reflects on the promise of the current wave of activism, why America is more reformist than revolutionary, and how to stoke the fire of anti-racism.
Back to top of page