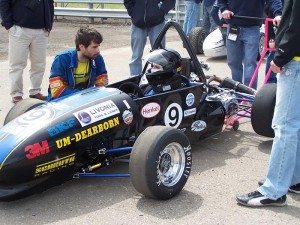 About 2,000 students representing more than 100 teams from around the world competed in the most prestigious of the SAE Collegiate Design Series.

“This year's event was very competitive and UM-Dearborn’s FSAE team did very well on both static and dynamic events,” said Taehyun Shim, associate professor of mechanical engineering, who advises the team.

Team captain Roland Dibra was proud of the group’s accomplishment, saying, "We finished 8th overall, the best our university has ever done in the FSAE Collegiate Design Series.  The competition was very tough, it gets tougher every year, but our car improved in all aspects as compared to last year, including power, weight and handling, and we placed 4th in the design presentation!"

According to the event’s website, the concept behind Formula SAE is that a fictional manufacturing company has contracted a design team to develop a small Formula-style race car. The prototype race car is to be evaluated for its potential as a production item. The target marketing group for the race car is the non-professional weekend autocross racer. Each student team designs, builds and tests a prototype based on a series of rules whose purpose is both to ensure onsite event operations and promote clever problem solving.

The pandemic hasn't blunted the momentum of faculty and students who are making AI a promising trendline for UM-Dearborn.

A UM-Dearborn engineering professor’s RehabBuddy system could take some of the guesswork out of at-home physical therapy.

How does pandemic + recession = seller’s market?

You’ve probably noticed the house down the street sold in days — over asking — during a recession and a pandemic. COB Associate Professor Lee Redding explains what’s going on.
Subscribe to the Reporter
Back to top of page