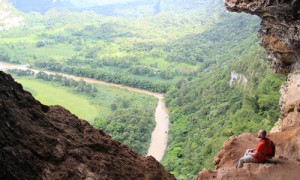 Geology 377 takes students outside the classroom—way outside.

A snorkeling excursion in the Caribbean Sea replaces reading a chapter in the textbook about the complexity of coral reef structures.

A trek along a 100-foot glacier supplants paging through a PowerPoint® presentation about the enormity of ice accumulation.

And a guided tour around Niagara Falls puts any maps of the massive waterfalls to shame.

In Geology 377: Field Methods, University of Michigan-Dearborn students don’t just study the Earth. They experience it.

“They learn through textbooks, they learn in labs, but this is their one chance to go out into the field and see geology from a geologist’s perspective,” said Jacob Napieralski, associate professor of geology. “No lab assignments. No textbooks. It’s doing the real deal.”

The Falls
Napieralski arrived at UM-Dearborn in 2005 determined to offer students a firsthand look at geology.

That opportunity came in the form of Field Methods, a course also taught by geology professor Kent Murray. Napieralski and Murray travel the globe with their students to help them better understand geology through field work.

Fresh out of graduate school, Napieralski knew exactly where to start. He had connections in western New York, so he organized his inaugural trip to Niagara Falls.

Once there, he set out on boats with his students to study the three waterfalls that straddle the international border between the U.S. and Canada.

Nick Nalepa (’07 B.S.) had a strong interest in geology, so he signed up for the trip.

“It was cool because we had an opportunity to go on actual research vessels, which allowed us to use a variety of sampling devices for water quality and stream sediments,” said Nalepa, who plans to graduate this year with a master’s degree in environmental science. “We got to use several different examples of testing equipment that we had previously read about in our textbooks.”

Nalepa had taken his share of science courses, but they pale in comparison to Field Methods.

“We study this material all the time and we get tested on it,” he said. “But it’s different when we get to use it in the field. It was nice to assemble all the building blocks and then turn that into something useful in the field.”

Niagara Falls was a good start, but Napieralski had other ideas on the horizon.

Land of Fire and Ice
Napieralski has studied everything from landslides to rivers.

But his real passion lies in glaciers, having spent years studying the complexity of the dense ice masses.

That’s why he wanted to offer his students more than just a few maps and images. So Napieralski packed his bags and flew to Iceland with 14 Geology 377 students

“When I take them to Iceland and we hike to our first glacier, the look on students’ faces is not something that could be duplicated in a classroom,” he said. “You feel this sense of awe. You’re just a small person relative to this enormous geologic feature. It’s graceful, it’s majestic, it’s beautiful.”

Michael Hoose (’13 B.S.) remembers that feeling. He and his classmates first approached what’s called a “salt and pepper glacier” because it appears black in some spots and white in others.

“It’s amazing how big they are, and you could still hear it crackling and see water coming out of it,” he said. “It’s powerful enough that you could go there, be inspired and say, ‘I’m going to be a glaciologist,’ and make it stick.”

Hoose has yet to commit to a future in glaciology, but after his trip to Iceland, he’s certain that geology is the right field for him.

“The landscapes there are amazing,” he said. “You go around and see fresh, fractured rock and everything has got these sharp edges. It’s unreal. It’s unlike anything else you could possibly imagine.”

That’s the reaction Napieralski had hoped for. UM-Dearborn students often grow accustomed to the southeast Michigan landscape, so it’s important to broaden their horizons.

“A really productive component of active learning, especially in geology, is to engage students in a real-world environment,” Napieralski said. “Textbooks tend to simplify geologic concepts, but when you take students out into the field, they begin to appreciate the complexity of science. A key element to Field Methods is to teach students how to construct ideas and solve problems based on their own observations, because I believe this helps prepare them to think like scientists.”

Hoose had studied the geologic makeup of the Rouge River in Dearborn, but he wanted a more robust environment to conduct field research. Iceland seemed to fit the bill

“We have a bit of a problem in a geology field in that Dearborn is a complete sedimentary environment, which is cool for studying rivers and streams, but not for actually studying rock,” Hoose said. “We’re kind of at a disadvantage here because we’re in more of an environmental geology location, so these trips give students a chance to really dig into some of these harder geologic concepts.”

Not everyone is a fan of ice and snow, however, so Napieralski selected yet another locale with a vastly different climate.

Enchanted Island
They say a picture is worth a thousand words.

Try telling that to a geologist.

“You can kind of imagine what these things look like up close, but not until you actually see the structures are you able to really appreciate what you’re learning,” said Sherika Gibson, who plans to graduate this year with a master’s degree in environmental science.

Gibson had sifted through dozens of textbooks that showcased various sites across Puerto Rico. So when Napieralski announced he’d travel to Puerto Rico for his Field Methods course, Gibson was quick to enroll.

On site,students walked the beach to research rock structures. They snorkeled in the Caribbean Sea to study coral reefs. And they navigated through dark caves to learn more about radiometric dating,which helps estimate how long ago rocks formed.

“What I was able to see, feel, smell...those things were a lot different than what I have seen in a textbook,” Gibson said. “You’re able to get an intimate relationship, as it relates to geology, when you’re out in the field.”

Lindsey Scupholm accompanied Gibson to Puerto Rico, but was a bit apprehensive about traveling abroad.

“I thought I was going to get there and be totally lost, in the back of the class, without a clue as to what I’m doing,” said Scupholm, who plans to graduate this year with bachelor’s degrees in environmental science and geology. “But no matter where you’re thrown in Puerto Rico, it could be the hardest situation or the most impossible rock, you just go through the process and everything’s manageable. It gives you a lot of confidence when you’re in front of this total mystery and you take little steps to get the answer.”

Scupholm had previously joined Napieralski during a trip to Niagara Falls, but wanted to experience what Puerto Rico had to offer. She wasn’t disappointed.

“In a classroom, reading out of a book is one thing, but when you’re standing next to a giant rock that’s really intimidating, it’s a big confidence builder,” said Scupholm, who has encouraged even non-geology majors to enroll in Field Methods. “If you’re at all serious about geology, this is a must-have course.”

In order to provide students with a greater understanding of Puerto Rican culture,

Napieralski invited a colleague from Grand Valley State University, Pablo Llerandi-Roman. A Puerto Rican by birth and an expert in field-based learning, Llerandi-Roman was able to offer students cultural insight that only a true native could provide.

“The students really experienced life in Puerto Rico, which differs from life in Michigan,” Napieralski said. “That’s the point of the course. Surround them with excellent geology, immerse them in a different culture and language and test their ability to work in a very different climate. In Puerto Rico, we work in downpours and around impressive lightning storms, while always looking out for the possibility of a hurricane or tropical storm. That’s all part of the field experience. It’s not a classroom where you can control the environment. Anything can happen.”

Travel Bug
A dozen or so lucky students get an opportunity each year to travel to Niagara Falls, Iceland or Puerto Rico with Napieralski.

Field Methods is so popular, there’s always a waiting list for one of the spots. But make no mistake: it is a science class, not a holiday in the sun.

“There’s a lot of excitement about doing what they believe is real science,” he said. “But those students who just want to go on vacation will be in for a big surprise. It’s geology boot camp.”

And with each semester comes the same question.

“How much does it cost?”

“One of the worst feelings is to give them an estimate and have their shoulders drop and rule it out,” Napieralski said.

Martin Hershock (’85 B.A.) understands the importance of experiential learning, and the College of Arts, Sciences, and Letters dean encourages faculty to engage their students outside the classroom. The Field Methods course is no different.

“Our students are going to be operating in a world where answers are not going to be black and white,” Hershock said. “Having the ability to bring a broad, interdisciplinary perspective and some realistic experience is absolutely critical for students to be successful, both in their college careers and throughout their professional lives.”

That’s why Hershock allocates funding from UM-Dearborn alumni and friends to financially support Field Methods and other experiential learning opportunities. The generosity of Dearborn’s friends helps offset costly items like flights to Puerto Rico, food expenses in Iceland and lodging in Niagara Falls.

Thanks to alumni and donors, students like Charles Ford are able to travel abroad and pursue their research interests without accumulating massive debt. Ford visited Taiwan last summer to research the mating habits of spiders.

“I never would have been able to experience these things, including my amazing trip to Taiwan, without the help of friends and donors,” Ford said.

And a group of pre-med students soon will have an opportunity to visit Honduras and treat residents afflicted with medical and dental ailments.

“These kinds of opportunities to engage in research or field studies are really important for broadening students’ perspective,” Hershock said. “Because our students don’t have a lot of expendable income, additional support is imperative and can make a dramatic difference in their lives.”