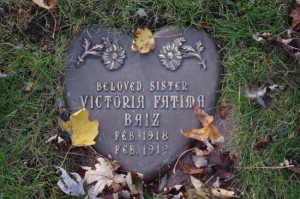 With a camera in hand, Ron Stockton trekked through several graveyards across southeast Michigan in search of Muslim graves.

Some stretched as far as the eye could see and contained hundreds of elaborate gravestones. Others were small and featured wooden grave markers. But all told a story.

“I’ve spent days in these graveyards,” says Stockton, University of Michigan-Dearborn professor of political science. “It’s amazing what you learn from gravestones. You learn history and culture. You learn about a person’s life and what they valued in life. The gravestone is the last chance to tell the world who you were, or what your survivors admired in you.”

Stockton photographed more than 1,000 Muslim gravestones over the past few years. He selected 39 of the best and will put them on display March 12 through May 6 in Mardigian Library.

“I went to graveyards as a child, so they were a natural thing to me,” he said. “And then, when I started going to different countries, I visited graveyards there. Every time I go to a new city or visit a new country, I visit their graveyards. I’m kind of a graveyard freak.”

Stockton’s passion for graveyards, and the stories and history behind them, prompted him to organize a course about them at UM-Dearborn.

“The last time we ran Graveyards 101, we invited the public,” he says. “There was an enormous community turnout. We had over 100 people there every night.”

Stockton expects to generate an even greater buzz with his photo exhibit, which will travel to Ann Arbor and other places.

“Nobody has ever done this,” he says.  “Nobody ever thought, ‘Why don’t we do an exhibit on Muslim gravestones in America?’ What you discover when you start looking at these graveyards is that there’s not a single pattern. Muslims are from around the world. We have found people from 21 different countries or former countries, plus white, black and even Hispanic Muslims. Every culture, every tradition has its own style.”

There will be a public lecture, “The Muslim Graves of Southeast Michigan,” at 7 p.m. March 12 in the University Center’s Kochoff Hall C.  For more information, call 313-593-5096