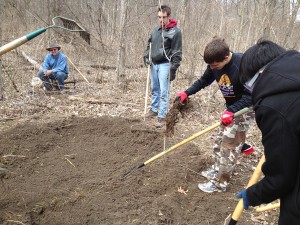 They call themselves the “Habitat Doctors.”

They’re prepared to embark on careers in medicine.

But on occasion, they’re prone to trade in their scalpels and stethoscopes for rakes and shovels.

University of Michigan-Dearborn’s Phi Delta Epsilon chapter adopted a habitat space within the campus’ environmental study area. And since the international medical fraternity adopted the wooded lot, students have rolled up their sleeves to help restore the health of their habitat plot.

“It’s all about medicine and hospitals for us, and that’s great, but I think the environment is something that’s ignored by some pre-meds,” said Humayra Khan, Phi Delta Epsilon chapter president. “I wanted our group to get exposed to the environment a little bit and I thought it’d be fun.”

Khan, who is studying biological sciences and English, asked Rick Simek at the university’s Environmental Interpretive Center (EIC) last fall how the chapter could help out around campus. As part of its bylaws, Phi Delta Epsilon chapters are required to organize events throughout the year.

Simek, manager of the natural areas, had planned to implement Adopt-A-Habitat at UM-Dearborn, so he decided to test out the program with Khan and her classmates.

It didn’t take long for Simek to realize the project’s importance.

Khan and her classmates removed invasive species and planted native grass and wildflower to help beautify and rehabilitate parts of UM-Dearborn’s natural area.

“The work that they do has immediate benefits,” Simek said. “It’s something that students can help out with, but they can also learn from and take ownership of. This is something they can come back and check on several years down the road.”

The Adopt-A-Habitat project is part of the EIC’s greater plan for maintaining and restoring ecological health to the campus’ 300-plus acres of natural lands. Phi Delta Epsilon is tasked with three missions – enhance native species’ diversity, improve the habitat and restore the ecological process that has been damaged or lost.

Since Phi Delta Epsilon signed on to help, other student organizations have expressed an interest.

“It takes a lot of helping hands to restore a habitat,” said Simek, who expressed the long-term benefits for students. “When these people go on to become doctors and someone says ‘invasive species,’ they’ll know exactly what they’re talking about.”

With nearly 50 years at UM-Dearborn and 12 U.S. presidential elections during his time on campus, Political Science Professor Ronald Stockton heads into retirement after witnessing a milestone year for student political involvement.

Student organizations continue to thrive in a remote-first environment. Planning the major campus event Take Back the Night, Women in Learning and Leadership (WILL) members say they've had increased connection and better communication.

Just a year after launching, the student club’s challenge-based meetups have evolved into the perfect complement to the university’s growing cybersecurity program.

Creating connection through art and expression

How can UM-Dearborn decarbonize its commuting culture?

Associate Professor Wencong Su breaks down some technology and culture changes that could help us cut carbon emissions from personal vehicles.

Vaccine hesitancy: A side effect of systemic racism

African and African American Studies Assistant Professor Terri Laws talks about the role of transparency, acknowledgement and actionable change in repairing the broken trust behind the COVID vaccine hesitation in communities of color.
Back to top of page