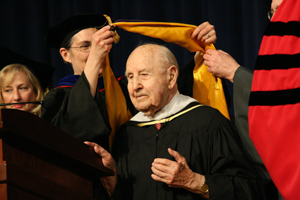 The Kochoff Pathway to Success Scholarship Program will support nearly 600 students with financial need in it first four years alone. Arthur Kochoff (pictured above) earned three undergraduate degrees from University of Michigan-Dearborn and received an honorary Doctor of Law degree from the university.

University of Michigan-Dearborn announced today an endowment gift of an estimated $12.5 million from the estate of Arthur Kochoff in support of student access to higher education. The bequest is the largest single gift in university history.

Kochoff and his late wife, Mary, were longtime supporters of the university who believed education had the power to transform lives. The bequest will be used to create the Kochoff Pathway to Success Scholarship Program, which will support nearly 600 students with financial need in its first four years alone.

“ As remarkable as the Kochoffs’ philanthropy during their lives has been, their ultimate legacy will continue to be realized for decades to come,” said Chancellor Daniel Little. “The endowment will provide a life-changing education to thousands of students over many generations, a fitting legacy to a couple who so dearly loved learning.”

The Kochoff Pathway to Success Scholarship Program will:

Kochoff, who passed away February 19 of this year, began his career on the assembly line at Ford Motor Company in 1939 and served as a manufacturing engineer for 49 years. Following retirement, at the age of 79, he started a new journey as a UM-Dearborn undergraduate student.

Kochoff went on to earn three bachelor’s degrees from the university—one in 1992 in liberal studies and two in 1996 in international studies and Hispanic studies. The university awarded him the honorary Doctor of Law degree in 2009.

In 2000, the Kochoffs, who were longtime Dearborn Heights residents, made their first substantial gift to the university to equip and support the state-of-the-art Arthur Kochoff Language Lab in the College of Arts, Sciences, and Letters Building.

A subsequent gift was used to establish the Mary and Arthur Kochoff Endowed Chancellor's Scholarship Fund to provide full tuition for four years to students with high academic achievement. This was the first $1 million gift from an alumnus in the history of UM-Dearborn. In recognition of that gift the large multipurpose room in the University Center was named for Arthur and Mary Kochoff, known as Kochoff Hall. The Kochoffs subsequently established an additional scholarship fund for students with significant financial need.

Following Mary Kochoff’s passing in January 2012, Arthur Kochoff’s most recent gifts were made to the CASL Dean’s Strategic Initiative Fund in order to name the CASL auditorium in Mary’s memory.

“This is a campus that transforms the lives of our students,” said College of Arts, Sciences, and Letters Dean Martin Hershock. “The incredible support that Mary and Arthur have given will ensure that many future generations of students will have the same transformational experience.”

News of retirement memoirs, donor gifts, the academic calendar and more were shared at the Sept. 23 U-M Board of Regents meeting.