With honor: Graduates recognized for academic achievement and engagement 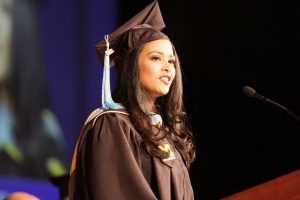 Shéma Aman graduated with a Master of Education degree with an endorsement in Reading Specialist K-12.

In December 2010, Aman earned her Bachelor of Arts degree in language arts from UM-Dearborn’s College of Education, Health, and Human Services, graduating with Distinction and earning placement on the college’s Dean’s List twice. She is a member of the university’s Golden Key International Honor Society.

She returned to UM-Dearborn in Fall 2014 to earn her graduate degree while serving as a sixth and seventh grade language arts teacher. She also teaches English as a Second Language (ESL) to basic and new language learners. She has earned the designation of Madison Model Teacher, an honor given to select teachers within the Madison School District. In this capacity, she offers training to staff in differentiated instruction and intervention strategies; she provides opportunities for teachers to witness best practice examples firsthand, thanks to her classroom’s “open door policy.”

Aman also is the district’s ESL community liaison, helping families in establishing transportation to school, filling out and translating documents, and serving families in their transition to a new country.

Aman will continue her studies in order to earn master teacher certification. She plans to pursue a Ph.D. in education and become a university professor, teaching future generations of educators.

Ayana King graduated with a Bachelor of Arts degree in communications. She was a recipient of the UAW Chrysler Dependent Scholarship and earned placement on the Dean’s List in Fall 2014 and Winter 2015.

A non-traditional student, King returned to complete her undergraduate degree after a lengthy hiatus. Since her return, she has balanced school, a full-time job and family responsibilities.

She was named 2014 Intern of the Year by the Humanities/History Internship Program for her work with the Wyandotte Democratic Club. During Summer 2015, King completed an internship at the U-M Detroit Center, where she worked with U-M alumni and published several articles on the U-M Detroit Center website. Her supervisor described her as “an ideal employee” and added, “I was especially impressed with Ayana’s work ethic, including professionalism and ability to produce professional-quality content. Whether faced with new or familiar tasks, Ayana always exceeded expectations.”

One academic adviser described King as “a model of modern success” and expressed hope that “her perseverance becomes contagious to those who have an open ear and are willing to change.”

King will continue working with American House and plans to use the skills obtained during her undergraduate career in her future efforts. 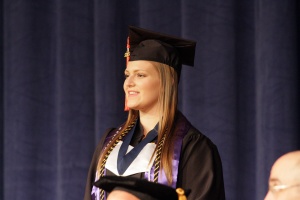 College of Engineering and Computer Science

Chelsea Szpond received a Bachelor of Science in Engineering degree in industrial and systems engineering (ISE), graduating with High Distinction. She was awarded University Honors from 2012-2015, is a 2015 Honor Scholar recipient, and was named to the Dean’s List five times throughout her collegiate career. She also was a recipient of the Dean’s Scholarship.

Szpond has demonstrated exceptional leadership skills and has provided remarkable service to the Industrial and Manufacturing Systems Department. She is president of the university chapter of Alpha Pi Mu, the national industrial engineering honor society, and is active in the Society of Women Engineers. She recently earned a High Achievement Award at the National Ergonomics Design Competition for Student Teams.

This year, Szpond put together a team consisting of ISE program alumni and current students and worked with the Mardigian Library’s media services center to create an ISE recruitment video for high school students. She is committed to raising awareness of the industrial engineering field among younger generations of students.

Szpond’s leadership and commitment on campus led to her being named a 2015 UM-Dearborn Difference Maker. Nominated by faculty and staff, recipients are recognized for academic achievement, integrity, leadership, and creative contribution in and out of the classroom.

Szpond has held co-op positions with DTE Energy for several semesters, which has allowed her to gain experience in many different departments within the company. As a result of her achievement as a co-op student, she has received a full-time position with DTE Energy upon graduation. 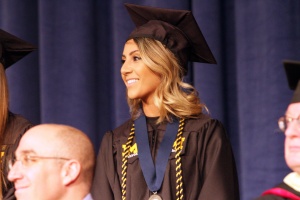 Freda Shatara has earned a Bachelor of Arts degree in education with a focus in early childhood and mathematics studies. She earned University Honors from 2012-2015 and UM-Dearborn Honors in 2015. She was named a James B. Angell Scholar in 2014 and 2015 and earned placement on the Dean’s List five times. Shatara also was a recipient of the Dean’s Scholarship.

Shatara’s excellence extends beyond her academics. She earned an Early Childhood Internship at the Early Childhood Education Center (ECEC). During her internship, she planned and implemented lessons in a preschool Great Start Readiness Program classroom and guided two new teachers at the ECEC with their Reggio Emilia journeys, which is the preferred early childhood teaching method used at the ECEC. This opened the door for Shatara, in that it allowed her to become a lead teacher at the ECEC in Spring 2015.

In addition, Shatara completed a practicum in the Westwood School District. During her practicum, she focused on tutoring math to low-income students in a more hands-on way. She also volunteered with both Student Michigan Education Association and Read to Me programs. In the Read to Me program, Shatara wrote lessons with a focus on reading comprehension and phonemic awareness and implemented them with children at the ECEC. Her efforts have been community-driven and she has proven her passion to help students in the classroom.

Shatara has accepted a position at the ECEC as a co-teacher in the toddler classroom. In Fall 2016, she plans to begin her elementary education career by finding a job in grades 1-3. She also plans to continue her education by applying for graduate school next spring. Her goal is to earn master’s degrees in educational technology from UM-Dearborn and in special needs with a focus on autism spectrum disorder from Wayne State University. 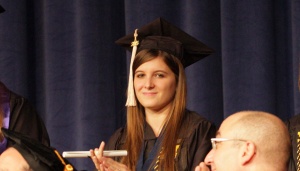 Rachel Ruta graduated with High Distinction with a Bachelor of Business Administration degree with a double major in digital marketing and information technology management. She was named a James B. Angell Scholar in 2014 and 2015, earned University Honors four times, earned UM-Dearborn Honors every semester since Fall 2011 and was on the Dean’s List eight times. She was a recipient of the Chancellor’s Scholarship and the Victor J. Streeter Endowed Management Information Systems Scholarship.

Ruta participated in UM-Dearborn’s study aboard program, visiting Italy during the Summer 2013 semester. During Summer 2014, she participated in the College of Business Internship Program and gained valuable experience at Deloitte and the Detroit Food Academy. Her Winter 2015 internship morphed into a part-time job at Governor Business Solutions, where she currently serves as the company’s marketing coordinator.

An active member of the campus community, Ruta has served as captain of the women’s club soccer team for two years and was a recipient of the 2015 William “Rudy” Radulovich Award in recognition of her efforts on behalf of the team. She also served as president of the Student Activities Board (SAB), the student organization that programs, coordinates and executes events to enhance campus and student life. She also was an active member of the Beta Gamma Sigma honor society.

Ruta plans to pursue a full-time position in her field and an MBA degree.

Thomaz Carvalhaes graduated with High Distinction with a Bachelor of Science degree in environmental sciences in August 2015. During his academic career at UM-Dearborn, Carvalhaes was named to the Dean’s List four times, earned University Honors three times and was recognized as a James B. Angell Scholar in 2015. He was a recipient of the Community College Transfer Scholarship.

Carvalhaes transferred from Oakland Community College prior to the Winter 2013 semester and soon became engaged in a variety of research projects at UM-Dearborn. These projects share the common theme of using Geographic Information Systems (GIS) to study urban environments.

Carvalhaes’ first project used GIS mapping to study the distribution of religious structures in Detroit’s Woodward Corridor. Through a collaboration with the Office of Metropolitan Impact (OMI), the Geospatial Analysis and Mapping (GAM) Program and the Detroit nonprofit Focus: HOPE, his second project mapped the safety and condition of public transit stops across Detroit. He also mapped patterns of urban stream burial.

These research activities have been disseminated in numerous presentations, including an oral presentation at the 2015 meeting of the Association of American Geographers in Chicago. His work on Detroit transit stop mapping was featured locally on Channel 7 news. Research manuscripts based on his work are in preparation, with one currently under review for publication in the journal Applied Geography.

In addition to his research activities, Carvalhaes was a member of the Ecology Club and the Tau Sigma National Honor Society. He also mentored fellow undergraduate students as a student mentor in sociology in 2013 and 2014.

Carvalhaes’ exceptional record at UM-Dearborn led to his being named a 2015 UM-Dearborn Difference Maker. Nominated by faculty and staff, recipients are recognized for academic achievement, integrity, leadership and creative contribution in and out of the classroom.

Since graduation, Carvalhaes has been engaged in research at Oak Ridge National Laboratory, assessing populations at risk to extreme weather events in coastal areas. He intends to pursue a Ph.D. in geospatial analysis or a related field. 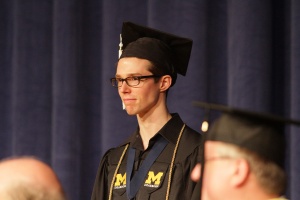 Gaber participated in the University Honors Program and excelled academically both in mathematics courses and in honors courses, exemplifying the ideal of a well-rounded liberal arts student.

In addition to maintaining an exceptional record in his coursework, Gaber was an active presence on and off campus both in research and in mentoring. In Summer 2015 he participated in a National Research Experience for Undergraduates Program at UM-Dearborn, where he worked on a project titled “Investigating Lambda-Permutations.” He presented this research at the Mathematical Association of America’s annual MathFest in Washington, D.C.

Gaber has contributed to the campus community through his role as a tutor at the Math Learning Center and most recently as a mentor for a calculus section. In addition, he has shared his enthusiasm for mathematics in the greater metropolitan area, working with middle school and high school students as a college instructor for the summer program Math Corps at Wayne State University.

Gaber has been offered a position at Urban Science upon graduation and may pursue a graduate degree in the near future.

UM-Dearborn students taking Arabic language courses will practice speaking through digital interactions with college students in Algeria and Morocco in an environment stimulated to look like Middle Eastern marketplaces, kitchens and other gathering spaces.
Subscribe to the Reporter
Back to top of page