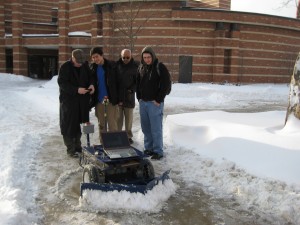 For the fourth consecutive year, CECS students put their robotic design, navigation and control skills to the test, as three UM-Dearborn teams competed in the Institute of Navigation (ION) Autonomous Snowplow Competition.

The event, sponsored by the Institute of Navigation (ION) and held January 23-26 in St. Paul, Minn., drew eight teams from five Midwestern states. UM-Dearborn’s teams comprised students from the Intelligent Systems Club (ISC). Despite the sub-zero temperatures, which played havoc with the robots’ radar and GPS systems, UM-Dearborn’s teams finished second, third and fourth for total prize money of $7,000.

“I’m very proud of our students and their performance,” said ECE Associate Professor Nattu Natarajan, an ISC adviser. “The experience taught them a lot about teamwork. Since no single person can do everything, they learned how to delegate tasks to reach a common goal. They also had to think on the fly during the competition to overcome obstacles. Their navigation systems weren’t designed to work in -15 degree weather.”

During the competition, a panel of industry professionals judged the teams on their snowplow designs and design presentations, operability and safety features, and on-field competition results. The robotic snowplows must clear two defined paths with no human input.

“Our students learned technologies and principles that very few graduate students get to experience,” Natarajan said. “Paper and pencil engineering only gets you so far. Preparing for and competing in the event represents doctoral-level work. That’s a big thing for our undergraduates and gives them an advantage over their peers when it comes to pursuing graduate degrees or employment. The students also get to know each other very well when they travel together, which is another valuable experience. We look forward to more success from next year’s teams.”