John Sinclair to 'Kick Out the Jams' April 4 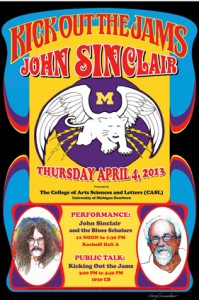 Sinclair, who is best known for managing MC5, a popular band that helped launch the 1960s punk movement, plans to visit University of Michigan-Dearborn next week.

UM-Dearborn’s College of Arts, Sciences, and Letters (CASL) is sponsoring “Kick Out the Jams” on April 4.

“When you consider some of the more influential advocates for social justice during the 1960s and 70s, John Sinclair is one of the first individuals to come to mind,” said CASL Dean Jerold Hale. “John was active in social justice, but he also planted himself at the forefront of Detroit’s innovative music scene in the 60s and 70s.”

Thirty years later, music still remains a passion for Sinclair. John Sinclair & His Blues Scholars will perform at noon in Kochoff Hall A. A presentation, “Kicking Out The Jams,” also is scheduled for 3 p.m. in the CASL Building, Room 1030.

“While John served as an influential political activist in the 60s and 70s, he can address the similarities between the political and social climates, past and present,” Hale said.

Sinclair’s notoriety, in part, stems from his 1969 drug-related arrest and imprisonment. He provided marijuana to an undercover officer, which resulted in Sinclair’s arrest and 10-year prison sentence.

Shortly after the Ann Arbor rally, Sinclair was released from prison because the Michigan Supreme Court ruled the state’s marijuana statutes were unconstitutional.

“John Sinclair has had a major impact on music and social justice, so for him to visit our campus and share his stories is fantastic,” Hale said.

Fall 2019 programming at the Mardigian Library

Your preview of the library's marquee October and November events.