Life in the Fast Lane

She gazed down the racetrack and took a few deep breaths.

Gandolfo focused on one thing – speed.

As soon as the green flag is waived, she pressed down on the gas pedal and took off.

“Driving such a light car that is capable of going zero to 60 in three seconds gives you such an adrenaline rush,” she said.

Gandolfo wasn’t racing NASCAR. She was a mechanical engineering student at University of Michigan-Dearborn.

When not in the classroom, Gandolfo and about 20 of her classmates competed on the university’s Society of Automotive Engineers (SAE) team. Formula members design, build and test prototype vehicles, which are evaluated based on their market potential.

“If you want to work in the automotive industry, this is where you come,” she said. 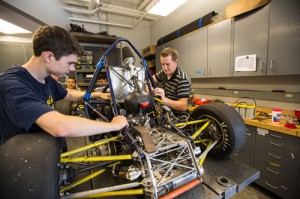 Gear Heads
They certainly are hard to miss.

Several vehicles line the walls of the IAVS. And UM-Dearborn students are responsible for each and every one of them.

As a freshman, David Tokarz took notice. He wanted to be part of the design process, so he joined the electric team.

“I’ve been a car guy my whole life,” said Tokarz, an electrical engineering student. “Joining SAE was a no-brainer for me.”

Tokarz hopes to work on electric vehicles for a living, so he plans to soak up as much experience as he can from SAE before graduation.

“It provides you with that actual experience of taking what you learn in class, then applying it to an actual product,” he said. “Before you go out into industry, you already have that experience. You have that total package of fundamentals and the actual application before you go to work.”

Tokarz already was enrolled at UM-Dearborn before he joined SAE, but he understands the team can serve as a recruitment tool for incoming students. It’s what helped land Austin Basnaw.

During his senior year of high school, Basnaw had his pick of schools.

UM-Dearborn was one of them. So when it came time to decide on a college, Basnaw went with the one that provided the best experiential learning environment.

“I knew that I wanted to come to UM-Dearborn because of SAE,” said Basnaw, a mechanical engineering student. “It’s really cool because you get to see the whole design process, start to finish. I’ve actually learned more about engineering through SAE than I have in some of my classes.”

And there’s some truth to that statement, said Tony England, dean of UM-Dearborn’s College of Engineering and Computer Science.

“In many cases, the co-curricular activities, such as SAE, are as important as the academic programs that we offer,” England said.

Engineering courses tend to focus on the analysis of problems, so students spend a majority of their time working through analytical issues. But the creative side is just as important, so England encourages all engineering students to utilize their skills outside the classroom.

“These students figure out how to understand the problem, how they might have a better solution and how to implement that solution,” England said. “Students who have gone through this have learned something about the work environment that some students won’t understand until they graduate.” 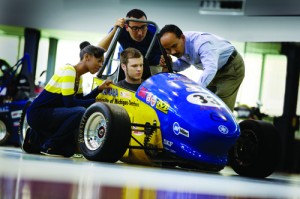 Resume Changer
Taehyun Shim has grown accustomed to the emails and phone calls.

“Do you have any qualified engineers who are graduating this semester? Preference for those with SAE experience.”

“Employers are more attracted to people with a working knowledge of cars,” Shim said. “They don’t only build these cars. They test and analyze problems, too.”

Those recommendations have created a growing employment pipeline between UM-Dearborn and the Big Three – Ford, General Motors (GM) and Chrysler.

“When you go into your first interview and tell them you built a car from scratch, it opens up a whole world of conversation,” said Leonard Prezecki, an engineering supervisor at Ford. “You can bring something to an interview that not a lot of recent graduates can. It just opens up a whole different world for you.”

That’s not surprising to Roland Dibra (’10 B.S.). A chassis engineer at GM, Dibra knows the importance of SAE. It helped him land a job right out of college.

“This entire process, from beginning to end, is very similar to what you’d experience in the professional engineering community,” he said. “The experience that I got here was able to carry through on my resume. Any employer would love to see that a student was able to get this experience without being paid because that shows the student is really excited and can devote his or her own time without any direct pay.”