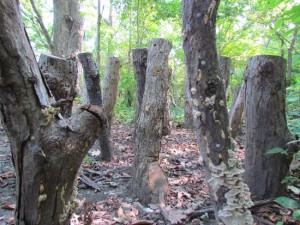 Nearly hidden from passersby—and from the sun’s harsh rays—among the towering trees, the Urban Mushroom Garden began in 2010 and now is home to more than a dozen species

Walking through the wood-chipped paths of the Environmental Interpretive Center, Director David Susko bent down to examine some mushrooms growing on a log.

“Just a warning,” he said as he broke one off and popped it in his mouth, “The taste will linger.”

It’s a taste many in the UM-Dearborn community are getting to know well—the earthy, meaty flavor of 100 percent organic shiitake mushrooms, grown in the EIC’s Urban Mushroom Garden.

“Shiitakes, or Lentinula edodes, are highly prized mushrooms that can be eaten fresh or dried for later use,” Susko said. “They’re great sautéed, steamed, fried or in soups.”

The EIC sells the popular mushrooms, using the proceeds to fund activities and programs within the mushroom garden.

“We have 300 inoculated logs in the garden. We easily could have used all 300 logs to grow shiitake mushrooms,” Susko said. “But we are a demonstration garden. Our goal is to show the community how to cultivate a variety of mushrooms using different techniques.”

The different techniques are on full display in the mushroom garden.

Visitors see stacks of logs in one corner, a mini-garden of dead stumps sticking out of the ground in another; even the woodchips they walk on are fertile ground for the mushrooms.

Susko hopes educating the public about mushrooms introduces them to a sustainable way for growing food, even in an urban setting.

“Plants need sunlight and soil to grow. But mushrooms thrive without sun and get their food from breaking down dead organic matter from things like logs and woodchips,” Susko said. “That makes mushroom gardens ideal for urban areas.”

This urban area’s current crop of mushrooms should thrive for another week or two. Interested in purchasing mushrooms from the UM-Dearborn’s garden? They are available on a first-come, first-served basis in the EIC.

The CASL Advising office welcomes Lynn Grimley to the team! In the follow Q & A, learn why Grimley is excited for her new role and shares why she thinks CASL students are unique.

Office of Metropolitan Impact Director Tracy Hall and husband William have been together for more than 30 years. They always thought they were good together, and Michigan Medicine recently confirmed that they really are close to a perfect match.

What to expect at next week’s Strategic Planning town halls

It’s your turn to weigh in on the vision for the university’s next decade. Here’s how to get ready for three town hall forums next week.

Give us five minutes and we’ll catch you up on some of the big ideas you’ll be hearing about in this month’s Town Hall forums.
Back to top of page