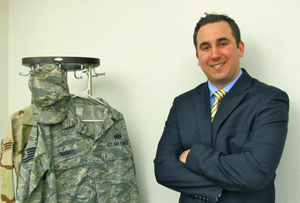 Aaron Iwaniec remained silent as his Humvee approached what appeared to be a roadside bomb.

His convoy also kept quiet as they prepared for yet another dangerous combat mission.

As the Humvee parked alongside a desolate road in Iraq, a soldier carefully walked toward the strange object to identify and, if necessary, defuse the explosive device. Iwaniec served as lookout, scanning the neighborhood for enemy combatants, taking photographs and collecting evidence.

“You pretty much have a gigantic bullseye on yourself every time you leave the base,” he said. “You know there’s always someone watching you, and that’s why it’s so nerve racking.”

The soldier eventually defused the bomb and Iwaniec returned safely to his Humvee. He breathed a long sigh of relief and then returned to his base.

As part of his 365-day deployment in Iraq with the U.S. Air Force, Iwaniec experienced that same emotional rollercoaster during 125 combat missions.

“My deployment really changed me and gave me a whole new perspective on life,” he said. “It made me appreciate life a lot more and not take everyday freedoms for granted. It also made me realize that I needed to actively and aggressively pursue my goals.”

Those goals inspired Iwaniec to enroll at University of Michigan-Dearborn, where he will graduate this month with a bachelor’s degree in accounting. His role with Beta Alpha Psi, 3.91 GPA and volunteer work with Habitat for Humanity, Boy Scouts of America and The Salvation Army earned him the College of Business’ (COB) Chancellor’s Medallion—the most prestigious academic honor for UM-Dearborn students.

“Several students will graduate from the College of Business this semester, and we expect they all will go on to have successful careers and strong positive impacts on their communities,” said COB Dean Raju Balakrishnan. “But not many students can say they defended their country admirably for nine years and then returned to a highly successful academic experience. Aaron can say that, and because of his drive and determination to succeed in all his endeavors, he’s most deserving of the College of Business’ Chancellor’s Medallion.”

Iwaniec’s road to UM-Dearborn is a unique one. He initially planned to study engineering at Penn State University, but instead decided to join the Air Force immediately after high school.

After nine years of active-duty service in the Air Force, Iwaniec transitioned to the reserves and moved back to southeast Michigan, where he grew up. His military background benefited him in the classroom because of its strict adherence to time management.

“The Air Force has three core values: integrity first, service before self and excellence in all we do,” Iwaniec said. “I’ve integrated those standards into my personal life, which guide me to always put forth the extra effort.”

That extra effort helped Iwaniec land an auditing and tax internship with Plante Moran, which in August 2015, will result in a full-time position with the public accounting firm’s tax department. In the meantime, Iwaniec plans to further his education by pursuing a master’s degree in accounting from UM-Dearborn.

“I look back on my life and think, even though I sacrificed a lot and saw things I didn’t want to see, I wouldn’t change any of it for a second,” he said.

Get to know Executive Writer Carl Paulus, a Michigan alumnus, persuasive writer and civic-minded communicator, who works to inspire the leaders and best.

UM-Dearborn student Penny Kane won campus’ first Policy Pitch Competition, where students presented public policy changes they'd like to see at the local level and beyond.
Subscribe to the Reporter
Back to top of page