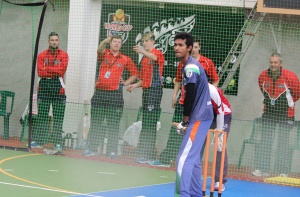 Nikhil Kanchan woke long before the New Zealand sun broke the horizon. He stretched and jogged, trying to focus his mind on the task at hand and not on the nerves manifesting in his stomach.

By 5 a.m. he and his teammates were heading to Hutt Indoor Arena for their last day of competition—that is, the last day of the Indoor Cricket World Cup.

Yes, Kanchan was living the dream.

Like many sports-related dreams, Kanchan’s started in childhood. The University of Michigan-Dearborn mechanical engineering graduate student began playing cricket as a toddler. He excelled and, after being introduced to indoor cricket by a friend, tried out for and placed on the state indoor team.

When he learned that India was putting together a national team to compete in the 2014 Indoor Cricket World Cup, he found himself at a crossroads. Kanchan just had arrived in the U.S. to pursue a graduate degree in engineering and didn’t think he would be able to go back to India to train and compete.

But, he said, his dream lived on thanks to help from UM-Dearborn’s Office of International Affairs.

Kanchan made the Indian national team and traveled to New Zealand last fall to compete in the World Cup. The Indian team was young and had no experience on the international level. They were competing against traditional powerhouses like Australia—the reigning World Cup champ—and New Zealand.

No one expected much from the team. They didn’t medal. But with wins over England, Singapore and Sri Lanka, they won over the cricket crowd and finished in fifth place. Kanchan also won Man of the Match in their game against New Zealand.

“We actually got a standing ovation,” he said. “It was really eye-opening for me, being able to see how much we can achieve when we push ourselves. I realized I could achieve so much more than I thought possible.”

Armed with a newfound confidence, Kanchan returned to UM-Dearborn to complete his master’s degree. And while he plans to pursue a career in mechanical engineering following graduation this winter, he’s not quite ready to give up his cricket dreams yet—after all, the 2017 World Cup is less than two years away.

“I think cricket will be my priority when I get back,” Kanchan said. “Nothing compares to the feeling of representing your country and standing with your teammates while the national anthem is playing and your country’s flag is being raised. It’s priceless.”