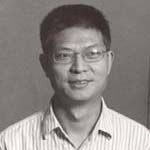 For many, it’s a top-of-mind topic as fuel prices continue to rise. For Chris Mi, professor of electrical and computer engineering (ECE) and director of the DOE GATE Center for Electric Drive Transportation, it’s a daily quest to minimize fuel consumption and reduce emissions, while saving consumers money.

For his contributions to hybrid electric vehicle modeling and power control, Mi has been named a Fellow of Institute of Electrical and Electronics Engineers (IEEE), the first regular faculty member in the ECE department to receive such an honor. Fellow is the highest grade of membership and is recognized by the technical community as a prestigious and important career achievement.

“This is a lifetime goal for many in the field,” Mi said. “It is a very high honor to be recognized by IEEE in this way.”

Mi’s research interests have focused on electric and hybrid vehicles since arriving at UM-Dearborn in 2001.

“It’s a relatively new subject, the marriage of mechanical engineering and electrical engineering,” Mi said. “When do you choose to run on the battery, or the engine, or both? It’s about maximizing fuel economy, minimizing emission and maximizing the lifetime of key components like the battery.”

He has sought to answer those questions with companies and the U.S. Army, where he and his research team helped increase fuel savings by 10-15 percent on plugin hybrids by developing an advanced algorithm for the power controls.

In 2011, Mi became director of the newly established Center for Electric Drive Transportation. In this role, he will develop partnerships with industry leaders while continuing to build the university’s doctoral and master’s degree programs in automotive systems engineering.

He also is an active member of IEEE. Mi was chair and vice chair of the IEEE Southeastern Michigan Section and general chair of the 5th IEEE Vehicle Power and Propulsion Conference, and has served as associate editor and senior editor of several IEEE publications.

Mi’s recent honor from IEEE is a distinction reserved for select members whose extraordinary accomplishments in an IEEE field of interest are deemed fitting of the prestigious grade elevation, according to the organization’s website. No more than one-tenth of 1 percent of members are selected as Fellows each year.

“The honor of becoming a Fellow of IEEE speaks highly to the work Dr. Mi has accomplished in the field of electric and hybrid electric vehicles,” said Tony England, dean of the College of Engineering and Computer Science and IEEE Fellow. “Dr. Mi is a tremendous asset to University of Michigan-Dearborn as we move forward with electric drive vehicle research.”

With a resolution to the pandemic nowhere in sight, UM-Dearborn is opting for a winter semester that looks a lot like fall.
Back to top of page