MiVote.org takes its show on the road 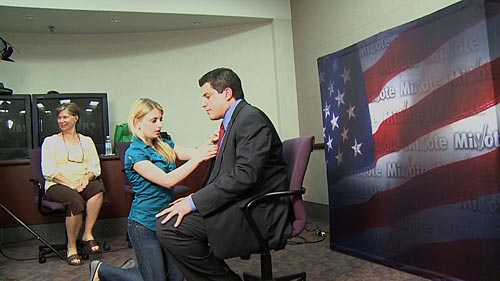 MiVote.org, the innovative website developed in a partnership between UM-Dearborn, The Center for Michigan and Detroit Public Television, has been updated with new interactive content that will prepare the citizens of Michigan for the upcoming elections. MiVote.org is a non-partisan, video-based website that allows Michigan citizens to connect directly with candidates, share their opinions, debate fellow voters and upload their own opinion videos.

Throughout the 2010 election season MiVote.org will highlight the top political issues in the state and include candidates running for governor, attorney general, secretary of state and Supreme Court in Michigan and open congressional, state House of Representative and state Senate races. The website will also include Great Debates, 2010, three one-hour gubernatorial debates, 50 half-hour legislative debates and several multi-candidate legislative forums.

"This is one of the most important elections in Michigan’s history," said Rich Homberg, president and general manager of Detroit Public Television. "MiVote provides the citizens of Michigan young and old with the information they need to be empowered and informed when voting."

To collect content and track the political climate throughout the state, MiVote: On The Road traveled to 16 cities and interviewed more than 200 candidates running in open state House of Representatives and state Senate races. During the MiVote: On The Road tapings candidates were asked to comment on a single, uniform set of questions addressing the issues that are most important throughout the state - education, jobs and the economy, balancing the budget and their views on government reform. The videos have been posted on MiVote.org for news outlets, politicians, and community members to view, comment on and download.

UM-Dearborn associate professor and pollster Tim Kiska blogged about the political climate in Michigan as he toured the state with MiVote: On The Road at www.MiVote.org/blog.  “MiVote.org provides a great opportunity to get students at UM-Dearborn and around the state involved in this election,” said Kiska. “It was great to get out in the state with MiVote: On The Road and speak to candidates and citizens to hear what really is important to them as we move towards the elections.”

MiVote.org also provides school districts with a curriculum guide that teachers can use to supplement civic education this fall.  “The educational component of MiVote is tremendous,” said Ed Bagale, vice chancellor for government affairs at UM-Dearborn.  “Even though high school-aged children may not be able to vote in November they have the opportunity to express their views and interact with candidates.  Our hope is this political engagement continues for many years to come.”

MiVote.org was launched during the 2008 presidential campaign as a partnership between the UM-Dearborn and Detroit Public Television, as a way for students and others in the community to express their views on issues important to them in the ongoing campaign. The site was also utilized during the 2009 Detroit City Council races to profile candidates.

'You did the university proud'

No matter the weather — rain, wind or sun — UM-Dearborn graduates walked across the stage during a week-long celebration of their accomplishments.
Subscribe to the Reporter
Back to top of page