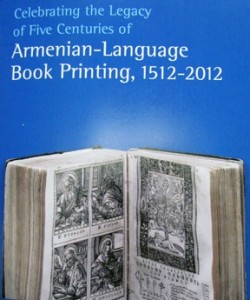 A new exhibit at Mardigian Library commemorates the heritage and diversity of Armenian printing.

“Celebrating the Legacy of Five Centuries of Armenian-Language Book Printing” showcases books from the 16th century to present day. The exhibit, which runs through Nov. 16, includes works from the permanent collections of UM-Dearborn’s Armenian Research Center (ARC) and the Alex and Marie Manoogian Museum in Southfield.

While the first printing press in Armenia did not appear until the late 18th century, Armenian-language books were published through presses throughout Europe and western Asia as early as 1512.

“Armenia was one of the earliest languages in the world in which books were printed,” said Ara Sanjian, ARC director. “This exhibition shows the diversity of where Armenian-language books have been printed—Venice, Amsterdam, Constantinople, Moscow—and the global reach of the Armenian people.”

The exhibit includes familiar titles in Armenian translation from John Milton, Shakespeare and Harriet Beecher Stowe, among others.

“The university is proud of the sustained contribution the Armenian Research Center has made to the cultural experience of the University of Michigan-Dearborn community, and this exhibition adds to that continuing legacy,” said Chancellor Daniel Little.

The exhibit, which is sponsored by the Robert Ajemian Foundation, is part of a yearlong global commemoration of the 500th anniversary of the first Armenian-language book. Celebrations throughout the world are marking the occasion, and UNESCO has named Yerevan the Book Capital of the World through April 2013.

For more information about the exhibit’s display at Mardigian Library, or to schedule a group tour, contact ARC at 313-593-5181.