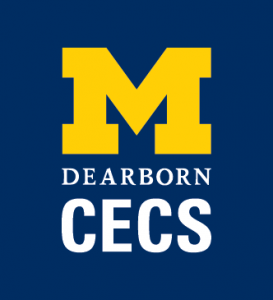 University of Michigan-Dearborn’s College of Engineering and Computer Science (CECS) is one of more than 120 U.S. engineering schools that announced plans to educate a new generation of engineers expressly equipped to tackle some of the most pressing issues facing society in the 21st century. A letter of commitment signed by participating schools was presented to President Barack Obama today.

These "Grand Challenges," identified through initiatives such as the White House Strategy for American Innovation, the National Academy of Engineering (NAE) Grand Challenges for Engineering, and the United Nations Millennium Development Goals, include complex yet critical goals such as engineering better medicines, making solar energy cost-competitive with coal, securing cyberspace, and advancing personalized learning tools to deliver better education to more individuals.

Tony England, CECS dean, said the new initiative closely aligns with the college’s commitment to move toward NAE’s Engineer of 2020. This program focuses on critical skills—including leadership, innovation and entrepreneurship—required for engineers to meet the industry’s changing needs.

“We are committed to offering this opportunity to our region’s high school graduates because we know the impact it can have on both our students and our region,” England said. “STEM education (science, technology, engineering and math) is necessary for economic growth in the region. And more than 80 percent of STEM-related jobs outside health care delivery are engineering jobs.”

Each of the 122 signing schools has pledged to graduate a minimum of 20 students per year who have been specially prepared to lead the way in solving such large-scale problems, with the goal of training more than 20,000 formally recognized “Grand Challenge Engineers” over the next decade.

England said the college will reemphasize experiential learning in order to work toward the goal. Plans include early exposure to the CECS Rapid Prototyping Laboratory and co-op experiences that fully integrate with the college’s curriculum and the needs of the region’s industries.

The college also will continue to work with regional K-12 systems. Since 2013, the CECS Extended Learning and Outreach Office has partnered with schools to ensure that young people and their families understand the career opportunities available in engineering.

The future’s best robots may not have arms, faces or talk. But they’ll still change how we live.

UM-Dearborn’s robotics faculty talk about how public expectations for robots are often out of sync with realities of the technology. But that shouldn’t stunt our optimism about the field’s future.