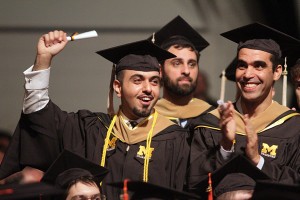 Themes of commitment and community echoed through the Fieldhouse as speakers challenged graduates to pursue their passions.

Anne Parsons, president and CEO of the Detroit Symphony Orchestra, spoke with degree candidates from the College of Business, College of Engineering and Computer Science and School of Education during the morning ceremony. She encouraged graduates to infuse positive energy in their everyday lives.

“Always remember that the glass is half full,” Parsons said. “How we act, that is the choice that defines who we are. Fulfill your responsibility to always make a difference.”

During the afternoon ceremony, Jeffrey Sachs, director of The Earth Institute at Columbia University, told College of Arts, Sciences, and Letters graduates they will have a great impact on the region’s prosperity.

“The talent is right here in front of us,” said Sachs, who also received an honorary Doctor of Science degree during the ceremony. “(You are the) new visionaries of the new era.”

UM-Dearborn Chancellor Daniel Little spoke with graduates during both ceremonies and reiterated that many of them will play a vital role in Detroit’s revitalization.

The university recognized six students as Chancellor’s Medallion winners during the ceremonies, honoring them for their academic record, character, intellect and integrity:

Addressing their classmates, Oyedele and Lienhardt spoke about the community of UM-Dearborn and taking that sense of community with them as they graduate.

“There is a reason your Michigan degree stands out from the other institutions,” Oyedele said during the morning ceremony. “They say it takes a village. Here, I say it takes a community. If the university has taught me anything, it is how to establish relationships wherever I find myself.”

Lienhardt expanded on that same idea in the afternoon ceremony. “We can leave the Fieldhouse today with the sole focus of getting a great job, making a lot of money and buying a large house—which all sounds great,” he said. “Or we can choose to pursue our personal goals while making sure we leave time to help our family, friends and neighbors.

“Whether it’s donating your time or energy, there’s nothing more meaningful than knowing you were the one that made a difference.”

FacebookTwitterLinkedIn
University-wideCollege of Arts, Sciences, and LettersCollege of BusinessCollege of Education, Health, and Human ServicesCollege of Engineering and Computer Science

The Maker Lab staff are at it again.