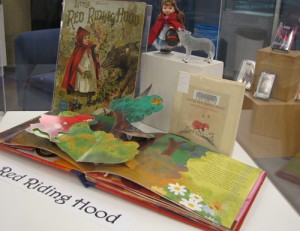 In celebration of the 200th anniversary of Grimms’ Fairy Tales, the Mardigian Library has a special exhibit on the first floor. Books from the library’s Juvenile Historic and Juvenile collections are on display, along with Disney collectibles related to Grimm brothers stories such as “Cinderella” and “Sleeping Beauty.” Wave your magic wand and come over for a look! The exhibit runs until Friday, January 11, 2013.

The first volume of Grimms’ Fairy Tales, containing 70 stories, was published on December 20, 1812. By 1857, additional volumes had been published, comprised of more than 200 stories. Many of us are familiar with some of the more popular Grimm stories, such as “Cinderella,” “Little Red Riding Hood” (“Little Red Cap”), “Sleeping Beauty,” and “Snow White.” But have you heard of “Riffraff,” “The Three Snake Leaves,” “Lazy Heinz” or “The Glass Coffin”?

Jacob (1786-1863) and Wilhelm (1786-1859) Grimm were born in Germany. While the brothers were very young, their father’s death plunged the family into poverty. They were driven to study hard and prove themselves, and their work paid off when they obtained special dispensations to study law at the University of Marburg. While there, they became interested in philology, Germanic students and folklore. The brothers worked as librarians in the royal library of Kassel, positions that helped enable their studies. The Grimm brothers were more than collectors; they created a methodology for collecting folk stories, worked to achieve a standard story style, and helped establish the basis for folklore studies. After the tales were collected, the brothers began to refine them – comparing different versions, making major changes such as eliminating offensive sexual details, and making them more appropriate for children. The Grimms’ collection includes not only magical fairy tales, but also legends, religious stories and anecdotes. In their later life, the brothers worked on a German dictionary that was unfinished at the time of their deaths.

Many of us grew up on the Disney versions of Grimms’ tales and believe we are very familiar with the stories. However, various editions and translations can be quite different from the sanitized and suitable-for-children Disney versions we know and love. Some of the stories are violent, gruesome, and frightening. The basic plot may be the same, but the details can be different. For example, in the original tale, the evil queen who tried to kill Snow White is her mother, not her step-mother. And in some versions of “Cinderella,” her father is alive and present while Cinderella’s step-mother and step-sisters mistreat and abuse her. There are three days of balls and dancing (not one). A white bird provides beautiful gowns and carriage (not a fairy godmother and cute mice). A gold slipper is left behind (not a glass slipper). One step-sister actually cuts off a toe in order to wear the slipper (really?!). As the step-sisters leave Cinderella’s wedding, pigeons peck out their eyes and blind them (think Hitchcock). It’s enough to give anyone a nightmare! Certainly not bedtime reading for small children!

From the characters of the popular movie “Shrek” to the toys found in local toy stores, the influence of Grimms’ fairy tales permeates our culture. The 2012 movie “Snow White and the Huntsman” and the 2011 film “Red Riding Hood” are both loosely based on tales recorded by the Brothers Grimm, but are aimed at adult audiences rather than children. “The Sisters Grimm,” a recent series of children’s books, follows the mysterious adventures of a fictional pair of sisters who are descendents of the original Grimm Brothers. Another recent book, “A Tale Dark and Grimm” tells the story of Hansel and Gretel who encounter not only the characters from the original Hansel and Gretel story, but also characters and situations from many other Grimm stories.

Grimms’ Fairy Tales have been retold by many authors, and many of the books have beautiful illustrations. Come take a look at some of the jewels in our collection!

Sources: “The Complete Fairy Tales of the Brothers Grimm” by Jack Zipes (Bantam Books, 1987) and Wikipedia.

With tax season upon us, Accounting and Finance Professor and CPA Michael Killey shared some of his insights or tips on individual tax filing.
Back to top of page