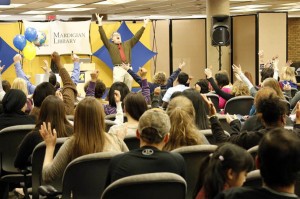 Special presenters were Carol Hagen and Matt Faulkner, author and illustrator of the children’s book, “The Night Henry Ford Met Santa” (Sleeping Bear Press, 2006). Hagen, a CASL graduate, spoke about the obstacles to writing and publishing the book. Faulkner, a Lake Orion resident who has illustrated more than 25 books, including some of his own stories, kept the audience laughing and engaged as he spoke about his illustrations.

The festival also included a writing contest for children in grades four through six. Entrants were asked to write about their dreams for the future. More than 200 entries were received, including essays from a third grade class. Winners were selected from each grade along with one grand prize winner. The children received Barnes & Noble gift cards, and first place winners and the grand prize winner were invited to read their compositions at the festival. Faulkner gave Anne-Marie Sab, the grand prize winner, an original illustration based on her essay. Winning entries will be submitted for possible publication to the Michigan Reading Association’s “Kaleidoscope” magazine.

Students from Professor Danielle DeFauw’s class “Literature for Children” led break-out sessions for the children attending the festival, focusing on activities to help develop their writing skills. At the end of the morning, a book signing was held in the Berkowitz Gallery, where a special exhibition of Faulkner’s illustrations is on display through Dec. 16. And of course, since we were celebrating Henry Ford’s birthday, birthday cake was mandatory!

The festival revived an annual conference organized for many years during the 1970s and ‘80s by Jane Romatowski, professor emeritus. A number of university departments and offices planned or sponsored this year’s event: the College of Education, Health, and Human Services; the Office of Metropolitan Impact; the Alfred Berkowitz Gallery; the Barnes & Noble Campus Bookstore; and the Mardigian Library. A big “thank you” to everyone who planned, supported or attended the event! 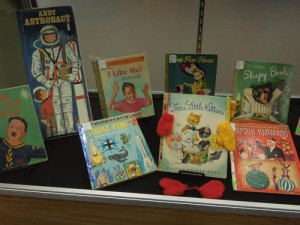 Tripping Down Memory Lane: Little Golden Books
Are Little Golden Books one of your fond childhood memories? Check out the first floor display case in the Mardigian Library where we are highlighting a few of these classics from our Juvenile Historic Collection.

When Little Golden Books were first published in 1942 by Simon and Schuster, the publishing of children’s literature radically changed. Priced at only 25 cents, the books were high quality, affordable, and beautifully illustrated. The books were sturdy enough to be handled by children. With their distinctive gold foil spine, the titles were easy to spot. Many of us remember Little Golden Books sitting near the grocery store check-out lanes, at a level easy for us to grab and give to our mothers to buy!

Twelve titles were initially published, with “Three Little Kittens” and “Bedtime Stories” being numbers one and two. The series was an instant hit, even though World War II was in progress and times were tough. “Poky Little Puppy,” number eight, is the best-selling Little Golden Book of all, with more than 15 million copies sold worldwide, and in many different languages.

Many famous authors and illustrators are represented in the Little Golden Books series. Margaret Wise Brown, author of “Goodnight Moon,” wrote “The Color Kittens.” Richard Scarry illustrated a number of the books, as did Garth Williams, illustrator of “Charlotte’s Web,” “Stuart Little,” and the beloved “Little House” books by Laura Ingalls Wilder.

Over the years, the ownership and publishing of the series changed. In 1958, Simon and Schuster sold the series to Western, and in 2001 Random House became the owner and publisher.

Several years ago, Susan Wineberg gave the Mardigian Library its first substantial donation of Little Golden Books. She has continued to add to the collection, and we also purchase books at antiquarian book sales or antique stores.

More information about the series can be found at the Little Golden Books website.  Come take a look!

Trial databases
The Mardigian Library has received a number of trial databases (all available through December 21). The titles are listed below.

We encourage you to try these databases and give us feedback. A positive review does not guarantee that we will have funds to acquire them; but it could help us determine whether we should pursue these items when funds are available. You may send your feedback to: Library-Selectors@umd.umich.edu.

There have been studies of African American voters, but this work is the first comprehensive statistical and historical portrait of the African American electorate from the colonial era through the election of Barack Obama. It combines the insight on the most well-known moments in this history with many findings that will be surprising to students. It is often assumed that African Americans did not vote until after the Civil War--the authors show this is not true for African American men or women. It is often assumed that resistance to African American suffrage came only in the South. The authors present a more complete picture by giving vote totals and analysis of referenda in which Northern states rejected African American voting in the years prior to the Fifteenth Amendment. These are just two examples of the fuller understanding that The African American Electorate provides by bringing together all of the extant, fugitive, and recently discovered registration data on African-American voters from Colonial America to the present. This pioneering work also traces the history of the laws dealing with enfranchisement and disenfranchisement of African Americans and provides the election return data for African-American candidates in national and sub-national elections where available over this same time span.

Combining insightful narrative, tabular data, and original maps, The African American Electorate offers students and researchers the opportunity, for the first time, to explore the relationship between voters and political candidates, identify critical variables, and situate African Americans' voting behavior and political phenomena in the context of America's political history.

After two opening chapters discussing the state of African American voting data and the previous literature on the subject, the chapters of The African American Electorate proceed in roughly chronological order, although some chapters span centuries of data on particular themes (e.g, suffrage organizations). Altogether, authors Walton, Puckett, and Deskins provide 340 tables, 184 figures, and 44 maps within their historical account. Within the chapter text, these images can be reached by a live link. The chapter text is best read and interpreted side-by-side with the figures, maps, and tables, and so we recommend right-clicking on these links (clicking the right-hand button on your mouse) and choosing the "Open link in a new window" option. From the chapter menu or the complete list of tables, data from the tables can be downloaded in Excel or CSV formats for further manipulation, calculation, and academic presentation, but they should not be sold or reproduced on the web without the permission of SAGE.

The many sources used to assemble this resource are found in the comprehensive bibliography and the copyright acknowledgements page. Both appear in the Appendices and are a font of information on additional resources for students in this area. The chapters also include extensive footnotes and quotations from top scholars. If any footnote appears incomplete, please browse to the previous portion(s) of the chapter to discover the full citation.

Database updates
Everyday Life & Women in America, c.1800-1920
This collection of periodicals, books, pamphlets, and broadsides is from the Sallie Bingham Center for Women's History & Culture, Duke University & the New York Public Library. In addition to 75 rare periodicals, such as Echoes of the South (Florida) and The Political Equality Series of the National American Woman Suffrage Association, Everyday Life & Women in America includes a full run of Town Topics from the New York Public Library. Books cover all aspects of family life and diverse topics from politics to farming. Includes strong coverage of prescriptive and advice literature, and manuals for domestic management.

The College of Engineering and Computer Science’s retiring dean talks candidly about his push to reinvent the engineering culture at UM-Dearborn — and the work that still lies ahead.