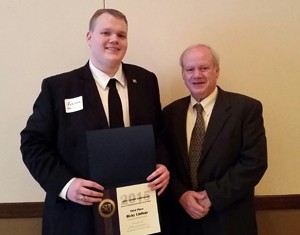 For Ricky Lindsay, the story's in the details.

It's showing how the face of a University of Michigan-Dearborn sports program, Dustin Sielski from the men's basketball team, is just a regular student—right down to the white Beats headphones draped around his neck.

It's taking a high school basketball game, zeroing in on a pair of neon yellow Nike shoes, and nicknaming the player the human highlighter because of his bright footwear, game-high score of 22 points and quick moves.

It's covering a volleyball game and telling the story of a junior standout who tore her ACL the year before.

“Journalism is covering an event, sure. But it's important to tell the story behind the story,” said Lindsay, whose grandma would save him sections of the Monroe Evening News when he was a young child. “Anyone can tell you a score or what plays were run, but there is so much happening before, during and after a game. That's the story I want to tell.”

Recently 22-year-old Lindsay, who's the one who brings people to the forefront, was in the floodlights himself.

Not only was the journalism major named the new editor-in-chief of The Michigan Journal, he also was honored as one of the best college journalists in the state.

The Society of Professional Journalists-Detroit Chapter (SPJ) honored reporters, photographers and editors from across the state at its annual awards banquet last Wednesday. And Lindsay was there to receive a scholarship for college students named in honor of Lawrence A. Laurain, a former editor of the Oakland Press and a reporter with the Macomb Daily and Daily Tribune.

He's the first student from UM-Dearborn to receive the scholarship award and only the second in the university's history to win an SPJ award.

“I know there are many good journalists. I wasn't expecting the call to tell me that I was a finalist, but I was happy to hear from them,” said Lindsay, who's served as The Michigan Journal sports editor. “This is something that will help set me apart on my résumé.”

Lindsay said writing for The Michigan Journal and guidance from his newspaper adviser and Communications Assistant Professor Tim Kiska led him to discover the right career for him.

“When I first came to college, I wanted to work in the medical field,” said Lindsay, saying he looked at medicine because he knew how close many clinicians worked with athletes. “At orientation, I signed up to write for the student newspaper. It was the first time I had even written for a publication.”

Since then, Lindsay's work has been published in the Dearborn Press and Guide, The News-Herald, on the MLive wire, and in the paper that started it all—the Monroe Evening News.

“I remember my grandma keeping the paper for me because the Tigers were on the front or because there would be something she'd want me to see,” said Lindsay, whose grandma passed away in 2009. “Now I've had my byline in that same paper and I wish she could have seen it. I feel like everything has come full circle and this is the path I was always supposed to take. So many things have led me here, but it all started with her.”

Here are your Chancellor’s Medallion awardees for Spring 2021

This commencement season, eight students are being recognized with the university’s top graduation honor.