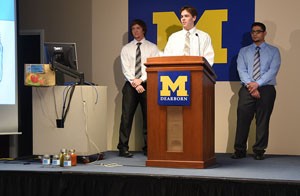 Presenting on the idea of “Cann-Ed Health Initiative,” Andrew Kubinski, center, speaks about produce needs of low-income residents in the Detroit area. His teammates are Tim Ritter, left, and Mohamed Said, right.

Working in his garden, Tim Ritter had an idea. The health policy studies major wanted to distribute healthy foods, like produce, to those in need.

To do this, he thought of a preservation method his mom used: canning.

Ritter then heard of Design Change, a new campus-wide idea challenge. And he decided—along with teammates and fellow seniors Mohamed Said and Andrew Kubinski—to take part in it.

“You do well by doing good,” said Kubinski, a marketing major, while preparing to present with teammates Ritter and Said. “If we make a more sustainable future and come up with efficient and effective ways of helping others, it benefits us all in the long run.”

The focus for the semester-long Design Change initiative was to provide solutions to issues surrounding healthy food and mobility/transportation, such as access, quality and education.

The theme of Design Change was presented at the Elliott Business Idea Pitch Day, the largest idea pitch competition at University of Michigan-Dearborn.

Leading up to the presentations with the Design Change focus, there were a series of workshops helping build skills in marketing, critical thinking and communication. Workshop funding was supported by the Michigan Initiative for Innovation & Entrepreneurship grant. Prizes totaling more than $8,000 were awarded by the MIIE grant and the Betty F. Elliott Initiative for Academic Excellence.

Students competing in the challenge had ideas ranging from solar panel road locks to recycling food waste from homes and stores on a large scale to use in community gardens.

Tim Davis, director of iLabs, said issues relating to mobility and access to healthy food were chosen for Design Change because they are regional problems, and ones students encounter regularly.

“When coming up with the focus, we wanted a big picture problem. Something that could be very inclusive. Eating healthy and getting around are issues which impact urban and rural areas, seniors and students,” Davis said. “Nearly all people can relate to some aspect of these issues.”

But Davis said Design Change is even more than creating solutions. It’s about teaching students a new way of thinking.

With canned vegetables in hand and a Power Point Presentation behind them, the students described their plans and goals for the non-profit organization idea. They said not only would it give people the nutritional benefits of eating fruits and vegetables, the items would last for one to five years.

“We’d like to take the traditional, yet useful, technique of canning fruits and vegetables into mason jars and provide them to residents, particularly those in need, around the Detroit area,” Ritter said. He said the next step would be to invest some of the $5,000 in market research, in licenses needed, and in supplies like mason jars.

Design Change Judge Ian D. Tran, a 2012 UM-Dearborn graduate, said he was impressed with the ingenuity and sustainable mindset of the presenting students.

Tran co-founded the award-winning Dearborn Sustainability Coalition, chairs the Advocacy Campaign for the US Green Building Council in Michigan and is a Social Innovation Fellow for StartingBloc, which brings together entrepreneurs, educators and activists to create change.

“One of the strongest points at UM-Dearborn is that the professors extend their classrooms beyond the walls of the campus,” he said. “The competition is another example of this University doing things right in a way that benefits the students and the area as a whole.”