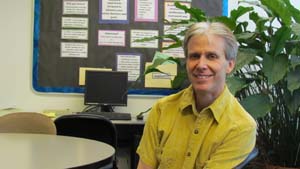 Jonathan Smith had just opened his email account when the message popped up.

It was a new email from University of Michigan-Dearborn Provost Catherine Davy. The UM-Dearborn English professor clicked on the email and had to read it twice to comprehend its message.

He was named a William E. Stirton Professor, the most prestigious honor UM-Dearborn awards to a faculty member.

“I was delighted, but very surprised,” he said.

Smith served on the review committee that selected mechanical engineering Professor Pankaj Mallick as the Stirton Professor from 2007 to 2012.

“I remember thinking, ‘Wow look at all of these people who have been nominated,’” he said. “They’re all fantastic. And I thought, ‘Maybe some day I would have a record that stood up with these people.’ But I never dreamed that I would be the next recipient. It remains a little surprising and hard to believe.”

The University’s Board of Regents approved Smith’s appointment at its July meeting. The professorship was established in 1977 to honor Stirton, who was the first director of the Dearborn Center, “as a tribute to a distinguished educator and administrator who was an inspiration to students and faculty while at UM-Dearborn.”

Smith’s appointment takes effect on September 1 and runs through Aug. 31, 2017.

“Professor Smith epitomizes the teacher-scholar our campus values,” according to the Stirton Review Committee. “He is an outstanding scholar whose research informs his teaching and he engages his students in ways that lead to extraordinary accomplishments. He is a tireless and generous community citizen, whether the community he serves is his department, college, campus, region or profession.”

The Stirton Professorship adds to Smith’s already-impressive resume. His passion for teaching and Victorian literature also earned him a nomination for this year’s Michigan Professor of the Year award. Smith didn’t win the award, but he certainly distinguished himself among the state’s top professors.

He credits his teaching philosophy for his success.

“I think my forte has been the way in which I involve students in research and the creation of knowledge,” he said. “My pedagogy is that, wherever possible, I try to incorporate significant research projects that are published in some form. I think there’s good evidence to show that when students feel they’re writing for an audience besides their professor, that they become more invested in what they’re doing.”

The professorship recognizes faculty research, which Smith knows a thing or two about. He is the author of two books, and co-editor of a third, that address the intersections of literature and science. Smith also has published 18 refereed journal articles and a spate of critical review essays.

Smith is well known for his ability to bring together historical literary scholarship regarding science in the Victorian period. His research efforts were recognized in 2008 when UM-Dearborn honored Smith with the Distinguished Faculty Research Award.

Aside from his research and accolades, Smith also garners a great deal of respect from his colleagues, including College of Arts, Sciences, and Letters Dean Jerold Hale.

“Jonathan is the perfect choice for the Stirton Professorship,” Hale said. “His professional life is a model of balance that includes internationally recognized scholarship, teaching focused on student engagement with literature and learning, and significant service to UM-Dearborn.”

A UM-Dearborn educational technology professor breaks down why remote education is a particularly tough challenge for public schools and how far our adaptation strategies can take us.

Want to earn an MSW with just one additional year of study? A new partnership with UM-Ann Arbor allows UM-Dearborn students to do just that.

To support students and help them prepare for success today and in the future, the university modified some admissions and registration process policies.