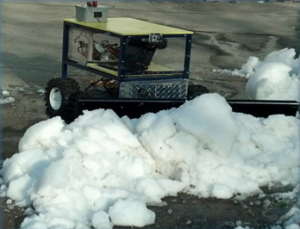 Hands were bloodied. Parts were broken. And, yes, even some tears were shed.

It was all part of the process for students competing in the 2013 ION Autonomous Snowplow Competition, where UM-Dearborn’s Team Yeti took third place and won $3,000 and the Bronze Snow Globe Award.

From the start, Team Yeti knew they wanted to use a brand new vehicle, designed as part of their senior design project.

Months of work went into the creation of the plow. They developed prototype and development schedules and broke the team into vehicle subsystem groups: chassis, powertrain, packaging, electrical integration and snowplow design.

“Throughout the whole process, we tried to replicate as close as we could to an automotive engineering environment,” said Mark Bajor, the powertrain leader for the group, who now works for Polaris. “This ended up working very well, and we learned a lot from it.”

The process was very much a team effort with Bajor, Mengxing “Simon” Chen, Craig Cowing and Cody Schmitt. They also used software developed by Angelo Bertani and Zach DeGeorge.

And it’s the teamwork that proved invaluable to Schmitt now that he’s looking to enter the engineering field.

“The teamwork aspect and design process is the same for any situation in the industry,” he said. “In fact, I thought this project was relevant enough to put on my resume, and interviewers brought it up multiple times during my interview.”

Team Yeti has been a mainstay at the competition since the inaugural event in 2011. This is their second consecutive third-place finish, led by adviser Nattu Natarajan, associate professor.

Each of the UM-Dearborn teams consisted of students from the Intelligent Systems Club, which works to promote robotics and the development of technical skills.