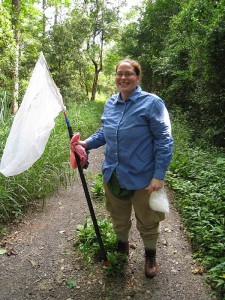 In fact, these University of Michigan-Dearborn students enthusiastically trek into the woods in search of Arachnids as part of their research with Anne Danielson-Francois, an assistant professor of biology at UM-Dearborn.

The trio is so passionate about spiders and the research they are conducting that each was chosen to receive an undergraduate diversity fellowship co-sponsored by the National Science Foundation (NSF) and the National Evolutionary Synthesis Center (NESCent).

The fellowships will allow the students to present and highlight their individual research projects later this month during the Evolution 2010 Conference in Portland, Ore. which is a joint annual meeting of three organizations: the Society for the Study of Evolution (SSE), the Society of Systematic Biologists (SSB) and the American Society of Naturalists (ASN).

“This is a national competition and only 25 fellowships were awarded by the society this year,” said Danielson-Francois.  “The fact that UM-Dearborn was awarded three fellowships is spectacular, as their fellow nominees are from Harvard, Duke, University of Texas and Vanderbilt universities, among others. Our students will be participating in the fellowship program and receiving individual mentoring from graduate students, post-doctoral students and faculty in evolutionary biology throughout the meetings.”

During the conference, Awad, Cole and Gagnon will have the opportunity to highlight their research.  Awad has studied the movement of toxic heavy metals through the food web of invertebrates. Cole, along with her research partners Chueh Hou and Joseph Stude, has examined the paternity patterns in the tropical Giant Wood spider and Gagnon looked at sperm release patterns in two species of funnel-weaving spiders. 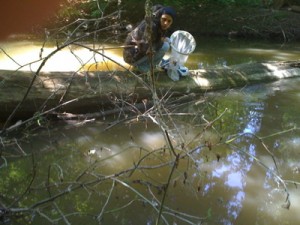 Awad chose to use the Rouge River for her research, collecting orb-weaving and terrestrial spiders, food items both with and without aquatic larvae, and soil and water samples along the lower branch of the Rouge at the beginning and end of the summer season.  She also collected samples from two more pristine sites, Johnson Creek in Northville and the Huron River in Pinckney. After preparing the samples using a nitric acid microwave digestion, she analyzed them for toxic heavy metals using an Inductively Coupled Plasma Mass Spectrometer.

Awad was surprised to find that heavy metals existed in all the samples she collected, including those taken from Johnson Creek and the Huron River.

“These findings definitely have environmental implications,” she said.  “Just because it looks clean doesn’t mean that it is.  The metals are still making their way into the environment.”

Cole traveled all the way to Taiwan to spend a month conducting her research on the entelegyne spider Nephila pilipes (Fabricius).  Working with Danielson-Francois and I-Min Tso of Tunghai University, Cole studied reproductive behavior of spiders in the field and in the laboratory, collecting approximately 100 female and 200 male Nephila pilipes in secondary forests of Taiwan along with field observations of matings in southern Taiwan. Controlled matings also took place at Tunghai University in Taiwan where females were mated to sterile and fertile males.   The females were transported back to UM-Dearborn and were cared for until eggs were laid.

Cole expected that the first male to mate a female Nephila pilipes would sire most of the offspring, based on the shape of the female reproductive organs in this species. Instead, it turns out that the amount of sperm transferred by a male is a better predictor of paternity.

“We found a positive correlation between female body size and the number of eggs laid in an egg sac,” said Cole.  “This relationship would explain intense male-male competition for fertilizable females, which we observed in the field.” 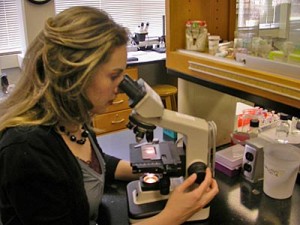 Gagnon didn’t travel far to conduct her research on the sperm release patterns in two species of funnel-weaving spiders, Agelenopsis pennsylvanica and Agelenopsis longistylus; she utilized UM-Dearborn, catching spiders in the natural areas of campus.

“We discovered that the male funnel-weaving spider transfers a relatively large amount of sperm during a single mating which on average lasted six hours and suggests intense sperm competition in the species,” she said.