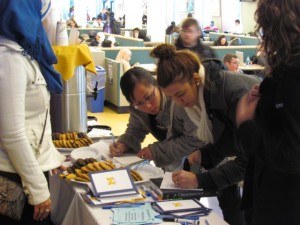 Raven Dunn assumed the thank you notes Student Philanthropy Council (SPC) sent to faculty and staff would land in the trash. Then he noticed one on his business professor’s desk. Hanan Hashem saw one in her professor’s office too.

“It was a simple way to thank people who have supported the university. I wasn’t expecting to get anything out of it in return,” Dunn said. “But seeing that note months later was validation that what we’re doing has a direct impact; what we do means something.”

Members of SPC received extra validation last month when they earned the silver award for Best Student Alumni Programming from the Council for Advancement and Support of Education (CASE) District V. The award recognized the student organization for the impact its mission has on the university.

“Our students are extremely philanthropic, but they often don’t realize that the service learning, hands-on service, fundraising and mentoring they do regularly all falls under the umbrella of philanthropy,” said Kristin McDonough, who was the SPC’s co-founding adviser. “With SPC, they’re educating each other on the collective impact they can make  together by recognizing the contributions and efforts of those who made their campus experiences possible.”

SPC started in 2011 as a way to acknowledge, celebrate and further the culture of philanthropy on campus. It was the first council of its kind in the state, according to McDonough.

From the start, it’s been a student-led initiative to give back.

“Being on SPC teaches us to think outside ourselves,” Hashem said. “It’s inspiring to be with people who have ideas and passion and want to give back to the school and the community."

SPC runs the Dearborn Difference campaign, in which they encourage others to share why they are proud to be a part of the university, and organize the graduating class gift to campus. This year, the council also partnered with Greek Life to launch Philanthropy Week.

And next month they’ll lead the annual campus-wide celebration of Tuition Freedom Day, the point in the year in which tuition dollars “run out” and the university operates on external support.

For Dunn and other SPC members, Tuition Freedom Day is one more opportunity to break out the thank you cards.

“Philanthropy, to me, is giving back because someone previously gave to you. Everything I’ve done, someone has assisted me along the way,” Dunn said. “So I feel pride that I get to be a part of this student org that will benefit the university and other students.”

News of retirement memoirs, donor gifts, the academic calendar and more were shared at the Sept. 23 U-M Board of Regents meeting.