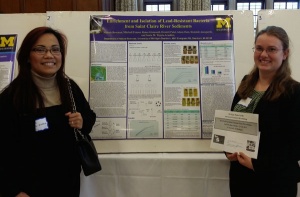 Nichole Bowman, right, won the Best Poster Award at the Michigan Branch of the American Society for Microbiology meeting. Bowman is a microbiology major and a research student of Professor Sonia Tiquia-Arashiro, left.

When Nichole Bowman heard about the Flint water crisis, she thought about what she could do to help.

In addition to sending water bottles, the microbiology junior thought of something else: Finding the right bacteria to help clean the water.

Through a campus research project, Bowman has studied sediments from St. Clair River and Lake St. Clair, isolated bacterium from the sediments and cultivated it. The goal is to gather information about each bacterium’s effects on removing pollutants from the water.

“We hope to discover and grow bacteria that can be used to reduce metal toxicity in water,” said Bowman, who notes that bacteria are ideal candidates because they are natural and relatively inexpensive to grow. “Seeing what’s happening in Flint makes me have an even greater understanding on how important something like this is. It makes me more determined.”

To date, they’ve found more than lead-resistant 90 bacterial isolates in the sediment samples taken from the St. Clair River and Lake St. Clair. They were able to grow and identify 23 of those according to National Institutes of Biological Information’s GenBank. Bowman said next steps include researching each one’s effects on removing metal contaminants in water.

To get the word out, Tiquia-Arashiro encouraged her research students to present an aspect of their work at the Michigan Branch of the American Society of Microbiology (ASM) meeting last semester.

More than 50 posters, representing several Michigan universities, were at the poster presentation portion of the event, which took place on U-M Ann Arbor’s campus.

“There were great presenters and important research projects there,” said Bowman, who shared this was her first time conducting and presenting research. She’ll present her research again in June at the nationwide ASM event Microbe 2016. “It was almost unreal that I won. It is such an honor.”

Bowman said she first became interested in the environment as a child. Her favorite thing to do was play outside.

“I loved to run around in the yard and help my mom in the garden,” she said. “I want to do what I can to find ways to reduce pollutants so kids can continue to have experiences like that.”

The 21-year-old said she chose UM-Dearborn because she heard of the research opportunities students had as undergraduates. But she didn’t know the impression it would leave on her.

“Working with Dr. Tiquia, has made me realize how much of a difference I can make. The research is broken down into obtainable goals, but it’s also looking at the big picture,” Bowman said. “It may lead to something that will make us all healthier.”