From tortoise to Wolverine: Donna Brown earns her B.B.A. after 28 years as a UM-Dearborn student 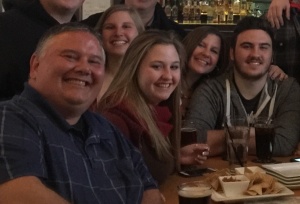 Donna Brown, second from right, with her husband, Marty, and children, Olivia, Marissa and Marty Jr.

“Yes, I am the tortoise,” Donna Brown said with a laugh, recalling the fable of the tortoise and the hare as she reflected on her time at University of Michigan-Dearborn.

Brown will graduate Sunday with a Bachelor of Business Administration degree in management—after 28 years as a UM-Dearborn student.

Starting in 1988, Brown worked during the day and took night courses. She got married and had three kids. Priorities shifted, but Brown was steadfast. One or two courses a semester, maybe a summer course here and there.

“It was an ongoing joke in my family about who was going to graduate college first—me or my children,” she said. “And my oldest daughter beat me!”

Friends often suggested she focus on an online degree program. But Brown didn’t think she could get the kind of college experience she wanted if she went that route. She said it was fun to be in a classroom with other students who wanted to learn. She looked forward to her night classes and the camaraderie she developed with other students.

“In my opinion, the students at UM-Dearborn are just top-notch. And, of course, the professors are amazing,” she said.

Professors are just as quick to compliment Brown, including Lecturer III Patrick Keyes, who taught Brown in several courses and helped her prepare to become a certified associate in project management outside of class.

“What stands out most is her persistence, leadership and collaborative skills,” Keyes said. “Donna demonstrated those skills in one of the initial collaborative classes between the College of Business and the College of Engineering, as well as in the project management certification workshop. She has continued to develop those skills, which will serve her well throughout all aspects of her life.”

For now, her path has taken her to Henry Ford Health System in Detroit. Brown, who has worked for the organization since 2012, has been working with her boss to put her degree to use by preparing a business proposal for a potential new division within her department.

Reflecting a bit more, Brown said she’s ready to shed that tortoise label. She has another animal in mind.

“In my heart, I’m a Wolverine through and through,” she said. “To be a Wolverine takes perseverance and determination. It takes commitment and hard work—that’s what makes it so special.”

Sunday was a big day for many in the UM-Dearborn community — nearly 1100 students graduated. Although there wasn’t a physical ceremony, the community rallied to recognize their achievement.

With Cady Ericson's education, connections and experiences — which include an internship with the IRS and managing a College of Business investment portfolio through the stock market's turbulent spring — she says she’s prepared and ready for what’s next.

Spring 2020 grad Owen Ekblad says his UM-Dearborn journey gave him a math education that's led to new experiences, like winning a U.S. National Yo-Yo Competition. Now he’s taking encouragement from professors to do something he never thought possible — starting his Ph.D in the fall.