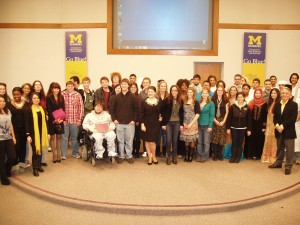 Lollapalooza made its way to Dearborn.

But this version left out the mosh pits, head banging and piercing guitar solos.

Instead, UM-Dearborn students recited 19th-century German literature and displayed illustrations of medieval battles with lions and tigers. It was all part of the Department of Language, Culture, and Communication’s third-annual “A Polyglotinous Lollapalooza: A Celebration of Literature in Four Languages.”

“It was an event that we could all share in together,” said Jacqueline Vansant, professor of German. “This was the biggest group that we’ve had. I was impressed more with the whole group than I’d ever been before.”

But Vansant wasn’t the only one who left impressed.

“This was the best Lollapalooza yet,” said Gabriella Eschrich, associate professor of French and chair of Language, Culture, and Communication. “We are so proud of our students. Their stellar performances show how much they care.”

Several audience members said they were impressed with how the students blended entertainment and education.

"I like the exposure to the language and culture of different countries and the students’ drawings," said Marissa Houston.

"I really liked the event,” Hornshaw said. “It promotes the knowledge of other languages.”

That’s the idea, Vansant said. And because student participation continues to increase, Vansant hopes to add another event in the coming years to showcase the talents of UM-Dearborn students.

'Was there a place for me in college?'

Dearborn Wolverine Helen Morrison, ‘78 B.A., shares lessons she learned through earning her degree during a time of social change, persevering after personal tragedy and witnessing how advocacy can change hearts and minds.

COVID-19 vaccination will be required on UM-Dearborn campus

Students, faculty and staff on all U-M campuses must submit vaccine information by Aug. 30.
Subscribe to the Reporter
Back to top of page