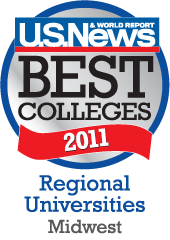 In addition to the overall university ratings, the College of Engineering and Computer Science was rated among the top undergraduate engineering programs in the country among schools whose terminal degree is a bachelor’s or master’s with few, if any, doctoral programs. The magazine publishes this list for “students who prefer a program focused on undergraduates.” UM-Dearborn began offering doctorate programs in 2009.

“It is particularly gratifying to see UM-Dearborn rank near the top on many of the U.S. News evaluations,” according to Stanley E. Henderson, vice chancellor for enrollment management and student life. “This is a tangible expression of what students and families have been saying for years about our quality and value.”

The ratings appear in the magazine's annual guidebook to America's Best Colleges, which was published Aug. 24.

In the magazine's ratings, UM-Dearborn is compared with other public universities that offer a full range of undergraduate and master's degree programs, but few or no doctoral degrees. Those institutions are rated by region because they tend to draw students from their surrounding areas, according to U.S. News.

The magazine said it bases its overall rankings “on quantitative measures that education experts have proposed as reliable indicators of academic quality.” Their rankings of engineering programs are based on a peer survey of deans and senior faculty members at schools around the country.

FacebookTwitterLinkedIn
College of BusinessCollege of Engineering and Computer Science

UM-Dearborn ranks fifth among regional public universities in the Midwest

This marks the 20th consecutive year the university was rated as one of the region’s best from U.S. News & World Report. Campus also received recognition from Washington Monthly and Forbes.

Ready to find your next favorite read?

UM-Dearborn faculty and staff share books they’ve enjoyed this summer and what they are currently reading. Check out the list and find the right read to add to your side table or carry-on.

Amanda Saleh and Daniel Arini will spend the semester working on two projects that advance the UN’s sustainability goals.

Campus researchers explore complex questions regarding COVID vaccination during a Summer Undergraduate Research Experience (SURE) project.
Subscribe to the Reporter
Back to top of page