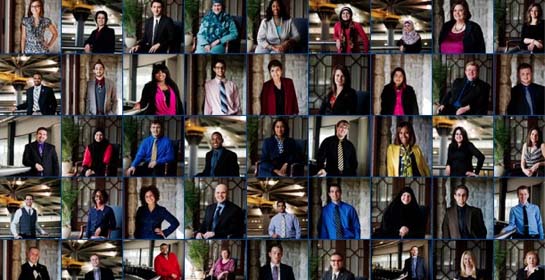 They are the students committed to making a difference – the academic scholars, club leaders, community activists and campus volunteers. Their impact can be felt on campus and throughout the community.

University of Michigan-Dearborn recognizes another group of extraordinary students as 2012 “Difference Makers,” a designation that identifies a student as one of the most significant contributors to the campus community.

“Difference Makers” are recognized for a variety of reasons. Some, like Zane Hatahet, are honored for their scholastic achievements. Hatahet graduated with a near-perfect 3.97 GPA while enrolled in the University’s Honors Program.

“Mr. Hatahet’s interdisciplinary studies highlighted his wide-ranging interests and intelligence,” said Karen Holland, special events coordinator in the Chancellor’s Office. “What sets him apart from most students is the breadth of his academic interests and his success in multiple fields.”

Some, like Jessica Reed, have held offices in campus organizations, changing the course of the group's history. Reed serves as co-president of the Political Science Association, president of Golden Key International Honour Society and speaker of the Senate for Student Government.

“Under her direction, all three organizations are thriving and making an impact on campus and in the community,” said Jonathan Larson, student activities supervisor. “She is truly an advocate for change in our region and will be throughout her life.”

Others, like David Knezek. Jr., make a difference in the larger community. In addition to serving as president of Student Government, Knezek served two military tours in Iraq and currently is running for state representative.

“I know that my military background undoubtedly plays a large role in the kind of leader that I am and drives me to try and improve the lives of others on our campus and in the community,” Knezek said.

This is the third year UM-Dearborn has named students as "Difference Makers" in recognition of their academic achievements, integrity, leadership and creative contributions. The program was created as part the campus's 50th anniversary celebration and established as an annual recognition award as a result of the campus' overwhelming support for the program.

The students were selected from nearly 100 nominees submitted by UM-Dearborn faculty and staff members. Nominations were based on leadership, creativity and contributions in the classroom, on campus and/or in the broader community. Academic achievement and integrity were important factors, as was demonstrated leadership on and off campus. A small panel of faculty and staff members reviewed the nominations and selected the "Difference Makers."

The 2012 "Difference Makers" will be honored at the campus' annual Student Leadership Awards ceremony on April 11. The students will receive a specially designed "Difference Makers" fleece jacket and be recognized in a full-page advertisement in Crain's Detroit Business. In addition, they will be honored at the Crain's "20 in their 20s" event next month and highlighted through University marketing materials.

With the induction of the new group of students, the University recently launched an updated look to the “Difference Makers” website. Users will now find it easier to search, sort and learn about the more than 150 students and alumni the University has recognized throughout the years.

Visit the "Difference Makers" website to discover the academic, service and leadership achievements of this year's students.