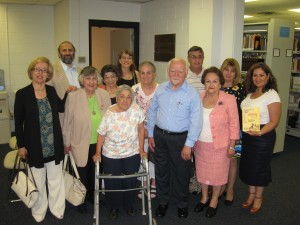 Vasbouragan is the Armenian medieval name of the area around Lake Van in modern Turkey. Many Armenians lived in the area covered by the medieval Armenian province of Vasbouragan until the years of the First World War.

The Vasbouragan Society brings together the descendants of the survivors of Armenians, who were deported from that area as part of the Armenian Genocide in 1915-1916. It has chapters all over the United States and Canada, and this year it held its annual convention in Dearborn.

While on campus, Ani Kasparian and Gerald E. Ottenbreit, Jr. gave the visitors a tour of the center, where they were impressed by the center's collection of books and other materials concerning their ancestral region.

Get to know Executive Writer Carl Paulus, a Michigan alumnus, persuasive writer and civic-minded communicator, who works to inspire the leaders and best.

UM-Dearborn student Penny Kane won campus’ first Policy Pitch Competition, where students presented public policy changes they'd like to see at the local level and beyond.
Subscribe to the Reporter
Back to top of page