This spring’s commencement season will bring back some of the traditional graduation bells and whistles, including a big-name commencement speaker. Poet Nikki Giovanni, renowned for her socially conscious work on gender and race, will address UM-Dearborn graduates in a pre-recorded video. The student speaker is CASL senior and writer Lena Hakim, who is graduating with a Bachelor of Arts degree in English with a minor in Arab American studies. She will also address the audience via video. Chancellor Domenico Grasso and Provost Sue Alcock will also speak to graduates. The pre-recorded addresses will be played live at each of the in-person, socially distanced commencement ceremonies taking place April 29 through May 4. They will also be shown on Facebook Live through the university Facebook account.

Poet Nikki Giovanni was born in Knoxville, Tennessee, on June 7, 1943. Although she grew up in Cincinnati, Ohio, she and her sister returned to Knoxville each summer to visit their grandparents. Nikki graduated with honors in history from Fisk University in 1967.

She has published more than two dozen volumes of poetry, essays and edited anthologies, as well as 11 illustrated children’s books, including “Rosa,” an award-winning biography of Rosa Parks. Giovanni’s autobiography, “Gemini,” was a finalist for the 1973 National Book Award. In 2004, her album “The Nikki Giovanni Poetry Collection” was a Grammy finalist for the Best Spoken Word Album. Renowned for her poetry, Giovanni has long used her literary gifts to raise awareness of social issues, particularly those of gender and race.

Giovanni has received numerous awards, including the inaugural Rosa L. Parks Woman of Courage Award, the American Book Award, the Langston Hughes Award, the Virginia Governor’s Award for the Arts, and the Emily Couric Leadership Award. She is also a seven-time recipient of the NAACP Image Award.

She currently serves as the University Distinguished Professor at Virginia Tech University.

Lena Hakim will receive a Bachelor of Arts degree in English with a minor in Arab American studies, as well as the Writing Certificate and Arab American Studies Certificate. She is a part of the Honors Program and has received the John J. Brownfain Honors Scholarship twice. Lena is the recipient of the Metropolitan Scholarship, along with multiple private scholarships such as the Dr. Ned Fawaz Scholarship and the CASL Alumni Affiliate Scholarship, which she received twice. Her academic achievements include being named a James B. Angell Scholar and a recipient of the William J. Branstrom Freshman Prize. She was also awarded University Honors twice and recognized on the Dean’s List every semester.

Lena lists her greatest academic achievement as using these four years to learn to become a better writer. She has received multiple UM-Dearborn Writing Awards and has been featured in UM-Dearborn’s fine arts journal, Lyceum. She is the head co-leader of UM-Dearborn’s creative writing club, Writing Center After Dark, where she gets to come up with writing exercises to diversify her and her peers’ writing skills. Since Fall 2020, Lena has been a Writing Consultant at the Writing Center, where she gets to do one of her favorite things: help other writers find their confidence and voice through writing. This past year, she conducted research on the representations of young Arab American women in coming-of-age novels.

Lena’s love for teaching, writing and helping others find their confidence and voice also extends to her extracurriculars. Last year, her high achievements in her English courses allowed her to become a peer mentor for the Introduction to English Studies course. Lena spent three years as a private tutor at a college preparatory academy, teaching K-12 academics to various ages and ESL to children and adult clients. Prior to that, she was an ESL tutor at the Zaman International B.O.O.S.T. program, helping immigrant women learn to communicate and connect with their new community. In addition, Lena also spent last year as a Girl Scouts coordinator to increase STEM and ELA-focused activities for the girls. 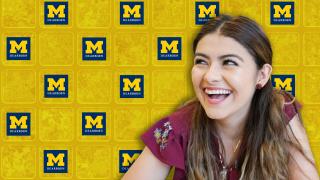 'I've had four amazing years. Coronavirus can't take that from me.'

Senior Rosa Gonzalez is a first-generation student whose parents moved to the U.S. from Mexico when she was seven to give her access to a quality education. Even with several life challenges, her diploma determination never wavered.... 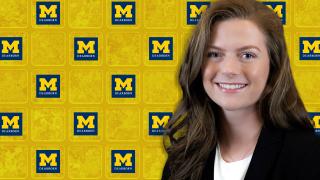 With Cady Ericson's education, connections and experiences — which include an internship with the IRS and managing a College of Business investment portfolio through the stock market's turbulent spring — she says she’s prepared and ready for what’s next....